Indian skipper Virat Kohli earlier suggested resting the Indian fast bowler during the upcoming season of the Indian Premier League (IPL) and he received mixed reactions from the cricketing fraternity regarding the same. Former Indian skipper, MS Dhoni, isn’t in agreement with the captain’s views as he reckons that IPL is the perfect platform for the bowlers to prepare themselves for the showpiece event in England.

In recent times, there has been an immense increase in the workload of the Indian cricketers. With back-to-back cricketing assignments, the BCCI has often picked different combinations for adjacent series and different formats. Considering the busy schedule that the Indian team has been a part of this year, Kohli opined that the World Cup-bound Indian pacers should not play the full IPL Season 12 in order to remain fit and fresh for the World Cup.

During the book launch of N Srinivasan, Dhoni termed IPL as an ideal platform for the bowlers to practice their skills ahead of the most-awaited tournament, with the diet and sleep being the factors that rather would need to be managed.

Dhoni explained, “Bowling four overs won’t make you tired. The four overs actually keeps you at your best, you are bowling the yorkers, bowling the variation and playing under pressure. I feel the bowlers can still play the whole of the IPL but what they need to manage is what they eat, when they sleep and wake up. I would like them to be at their best when it comes to the skill factor. I always felt IPL was the best time to get in shape because I had a lot of time.”

Former Indian skipper has been called back to the T20 squad against New Zealand after being dropped for the West Indies and Australia series. Starting with the ODI series Down Under, he looks likely to feature in most of the limited-overs encounters for the team as the management looks to give him ample match practice ahead of the World Cup.

Ahead of the 2019 ICC World Cup, Team India is slated to face the Aussies (ODI), the Kiwis (ODI and T20I) series and Zimbabwe with the IPL 2019 to follow next. With such a tight cricketing schedule before the World Cup, Dhoni acknowledged that it is important for India to keep their fast bowlers free from injury free.

ALSO READ: MS Dhoni Reveals His Fears Ahead Of IPL 2018

Describing the same, Mahi said, “Keeping our bowlers’ injury free is important. If you rest them, the first thing commentators say is they are rusty, and if you make them play, then is he not too fresh. So we have to find that fine balance even though it might be a bit difficult to manage.” 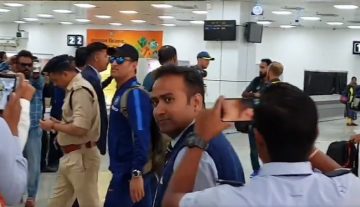