Legendary Indian cricketer, MS Dhoni decides to announce his retirement from all forms of the game in the occasion of the 74th Independence day. He is the only captain in the history of cricket to win all the three ICC trophies (T20 World Cup 2007, ODI World Cup 2011, Champions Trophy 2013).

Dhoni, who will be leading the Indian Premier League (IPL) franchise, Chennai Super Kings in the upcoming edition in UAE. On Saturday, he posted a video on Instagram announcing his decision. Captioning the post, Dhoni wrote, “Thanks a lot for ur love and support throughout. from 1929 hrs consider me as Retired.”

Thanks a lot for ur love and support throughout.from 1929 hrs consider me as Retired

Dhoni played his last International match when India suffered a loss against New Zealand in the semi-final of the 2019 World Cup in Old Trafford. Since then there were a lot of speculations making rounds regarding his future in international cricket, with the emergence of players like Rishabh Pant, KL Rahul, and  Sanju Samson in recent times.

Earlier this year, BCCI had decided to drop him the central contracts list but there were still rumors that Dhoni would not retire from international cricket. The upcoming edition of the IPL was seen as the tournament which could have paved his way for him making a comeback in the national squad.

Dhoni made his international debut in the Indian ODI squad in 2004 against Bangladesh but announced his arrival with a blistering 148 against Pakistan at Vizag. The World Cup-winning skipper is the third in the list of most dismissals as a wicket-keeper batsman. Apart from Mark Boucher and Adam Gilchrist, he is the only gloveman to have more than 800 dismissals in international cricket.

Here is how Twitterati reacted to his retirement:

16 years of a remarkable career. A brilliant human being, I doff my hat to thee #ThankYouMSDhoni https://t.co/HSBBik5j4T

Elder brother, mentor, captain and above all a legend of the game. Learnt so much from you skipper. The game will miss you 💙 #legend pic.twitter.com/T6WnNPp1RH

Every cricketer has to end his journey one day, but still when someone you've gotten to know so closely announces that decision, you feel the emotion much more. What you've done for the country will always remain in everyone's heart…… pic.twitter.com/0CuwjwGiiS

Don't Cry Because it's Over.
Smile Because It Happened.

Dhoni finishes off in style!

He has retired from international cricket 16 years after making his debut 👏👏👏 pic.twitter.com/1e5ymqhd4O

Welcome to the retirement club, MSD!
What a magical career! 🤝

Suresh Raina-the 1st Indian to score tons in all 3 formats-retires from international cricket too. Came in the side as a 18-yr-old & grew from strength to strength.Exceptional fielder. Played crucial knocks in WC 2011 (QF v Aus, SF v Pak). Would give more than 100% in the field

When you lead without saying, get the best with out asking, build a team without meetings ,be humble when others crumble and an epitome of simplicity …you are @msdhoni #Dhoni pic.twitter.com/EhC0yFhbOX

Thank you @msdhoni & @ImRaina for all the wonderful memories 🏏🇮🇳 🙏🏻

You will be missed 💔@BCCI 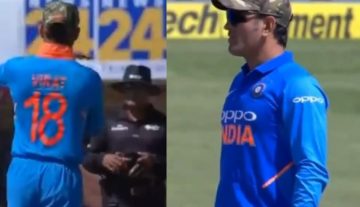