Former Indian skipper, MS Dhoni has always been known to do some unthinkable experimentations with his looks and hairstyles. Be it from sporting the long hair to the Mohawk and going all bald in-between. Again, the veteran cricketer has got a new-look ahead of upcoming T20I and ODI series against Australia. The photos of his new look were shared by his friend and hairstylist Sapna Moti Bhavnani. He is looking polite and smart with his new look.

In the first picture shared by Bhavnani on Twitter, she captioned it by calling him, “Hi handsome”.

In 2019, Dhoni has been in a tremendous form during the Australia and New Zealand series. He silenced his critics with the bat during the ODI series against Australia Down Under, where he bagged the Man of the Series for amassing 193 runs and scoring two fifties as well.

Mahi was even praised for his quick glovework behind the stumps which helped the team dismiss many important batsmen. Apart from that, he also adds value by guiding the young spinners and helping captain Virat Kohli with DRS. He has proved his worth in the side and his experience will add massive value to the Indian squad in the World Cup.

On Friday, BCCI announced the squad for the Australia series and Dhoni has been included in all the squads.

India will be taking on Australia at home in two T20 Internationals (T20Is) and five One-Day Internationals (ODIs). The T20Is will be played on February 24 and February 27 in Visakhapatnam and Bengaluru, respectively, followed by the ODI series starting in Hyderabad on March 2. 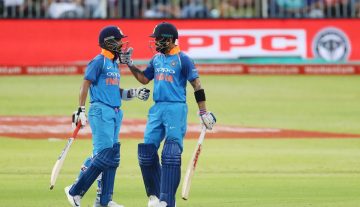