Former Indian skipper MS Dhoni’s dedication towards cricket can’t be argued as it has earned him an immense amount of respect from various corners of the international cricket. Although he is no longer similar to his younger days of cricket, his hunger to get better with each passing day hasn’t diminished by any stretch of the imagination. Dhoni is arguably the most active cricket in Indian cricket ever since he made his debut.

Mahi decided to hang his boots from the longest format of the game back in 2014 but has continued playing the ODIs and T20Is for India. He has earned himself a reputation of being one of the best finishers of world cricket. In recent times, he was hugely criticized for playing the ‘waiting-game’ more often than not. He answered them appropriately and notched some superlative knocks in the recently concluded season of IPL.

Dhoni will be looking forward to locking horns with Ireland for the two-match T20I series, which gets underway on the first week of July. He took the rather ‘cursed’ yo-yo Test and passed the same without even breaking a sweat. He is currently in Bangalore where he trained at the National Cricket Academy (NCA), away from the crowd.

During the session, MS had Raghu, the nets team’s throwdown expert, and speedster Shardul Thakur. He practiced for 2 hours at a stretch. Following the rigorous session, he took a break and then resumed batting. This time Siddarth Kaul, one of the new entrants in the Indian team, was also present.

Raghu started with his deliveries and gradually increased his pace. MS defended, swayed away and even smacked a few of them. At times, he called up Shardul Thakur and gave him pieces of advice. His reflexes aren’t the same anymore and he had missed a few as well. Nonetheless, it made a beautiful sound when the ball met the bat.

Once the session came to an end, Dhoni noticed a couple of onlookers watching him. “Bhanak laag gaya (people got the hint about Dhoni’s presence),” he gave a smile and walked inside the NCA dressing room. 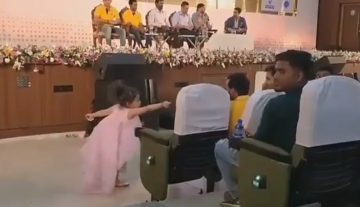