There is no doubt about the fact that MS Dhoni is arguably the most successful limited-overs skipper of India and his resignation from the captaincy, he left fans and followers stunned. But he had his own reasons behind the surprise resignation and as a genuine team man, his big decision too was taken keeping the team’s interests above his personal ones.

But why did he quit captaincy? Was there a sense of disappointment? Dhoni put to rest all the rumors at a motivational programme with the CISF at Ranchi’s Birsa Munda Airport recently, as quoted in SportsRush, he said: “I resigned from captaincy because I wanted the new captain to get enough time for preparing a team before the ICC Cricket World Cup 2019. Selecting a strong team without giving the new captain appropriate time isn’t possible. I believe that I left the captaincy at the right time.”

Dhoni led India in 60 Tests, winning 27, losing 18 and drawing 15 – the best so far by any Indian skipper in the longest format. In the ODIs, he led India 199 times, winning 110 games while lost 74. Four matches were tied while 11 were inconclusive. Besides, he also captained India in 72 T20Is, winning 41, losing 28, tied one while two matches had no results.

As a captain, Dhoni led India to win two world titles – one in the 50-over format (2011) and another in the 20-over format (2007). Besides, he also led India to a bunch of victories in various countries, including Australia where his team won a tri-series title in 2008 and in England where India won the Champions Trophy under his leadership in 2013.

MS had a break after the limited-overs series in England ended and will again don the blue jersey during the upcoming Asia Cup where India will meet Hong Kong and Pakistan in the group stages. When asked about India’s 1-4 loss to England in the Test series, Mahi said the lack of practice games ahead of the series made it difficult for the Indian batsmen to adjust to the foreign conditions. 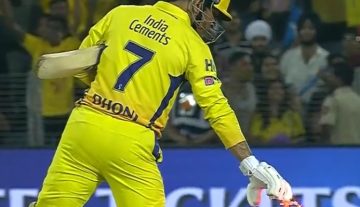