Kings XI Punjab (KXIP) co-owner Preity Zinta often been seen supporting her team at full throttle and similarly she did it in the UAE for the just-concluded IPL 2020. The veteran Bollywood actress was in the gulf country right from the start of the tournament to cheer for her side. She also used the opportunity to learn the language Pashto from KXIP’s Afghanistan star Mujeeb Ur Rahman.

At the start of the IPL 2020, Zinta had flaunted her Pashto skills by sharing a video of herself speaking to Afghanistan’s national language fluently. On Thursday, she posted another video on her social media accounts where she could be seen learning the language from Mujeeb.

In her caption, she mentioned that Mujeeb taught her new words in Pashto. She also asked her fans if anyone could figure out the conversation between her and the mystery spinner. Preity began the video by saying ‘Salaam’ to Mujeeb and concluded by thanking him.

Captioning the video on Twitter, Preity Zinta wrote: “Throwback to all the awesome #IPL2020 memories and behind the scene Chatting with @mujeeb_r88 is always fun specially when he teaches me new words in Pashto. Can anyone figure out our Conversation????”

Throwback to all the awesome #IPL2020 memories and behind the scene fun🤩Chatting with @mujeeb_r88 is always fun specially when he teaches me new words in Pashto😍 Can anyone figure out our Conversation???? #Pzipldiaries #ThrowbackThursday #BTS #Ting pic.twitter.com/eXKCOmjlWM

KXIP’s IPL 2020 campaign ended on a disappointing note once again as they failed to reach the playoffs. Under the captaincy of KL Rahul, Punjab finished the season at the sixth spot with six victories from 14 games. KXIP had a disastrous first half in the IPL 2020 as they managed to win just one of their opening seven matches of the season.

But they bounced back in style in the second half and won five games on the trot to put themselves in contention to reach the playoffs. However, they failed to carry forward the momentum as they lost their last two games and bowed out of IPL 2020. KXIP have not made it to the playoffs since their appearance in the final in 2014. 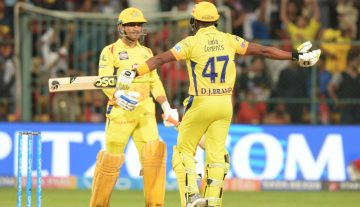