Every now and then the Mumbai Police come up with unique cricketing analogies for its civic lessons and something similar took place on Wednesday after the Indian skipper Virat Kohli became the latest entrant to the elite 10,000-runs club in ODIs while batting in the second of the five-match ODI series against the Windies. The Mumbai City cops praised Kohli for his phenomenal form but in a unique way.

Kohli became the fifth Indian and 13th batsman in the world to score 10,000 runs in ODIs though he did it much faster than anybody else. He broke the record of his fellow countryman Sachin Tendulkar who completed his 10,000th ODI run (also the first on the planet to do so) in 259 innings. Kohli made it in just 205 innings. In the process, he also slammed his 37th ODI century, which took him a spot closer to Tendulkar who has 49 under his belt.

Like the rest of the Twitterati, the Mumbai Police came up with a tweet lauding Kohli’s efforts and said it would not hand any “over-speeding challan” to the batsman but would only praise him and wish for more runs. It should also be noted that Kohli, who will turn 30 on November 5, took just 11 innings to reach 10,000 from 9,000 runs in the ODIs.

Virat slammed his second consecutive hundred of the series in Visakhapatnam (he did that 7th time in his career) although India failed to win the game despite scoring 321 runs in 50 overs. The Caribbeans chased well only to falter in the death overs and the game ended in a tie.

Kohli’s 157* completed his 10,000th run when he was on 81 and was adjudged as the Man of the Match for the second consecutive game. At the time of making history, he was accompanied in the middle by his predecessor MS Dhoni, also the owner of 10,000 runs in this format. India is leading the series 1-0 with the third game to be played in Pune on October 27.

The Mumbai Police in the past has come up with funny tweets to make people aware of rules with an analogy with cricket. During the Asia Cup last month, it asked people not to cross the line, just as the Indian bowlers would want their balls not to. 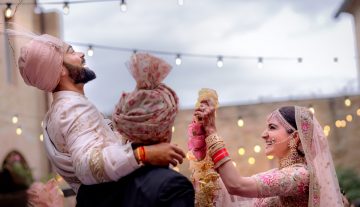