Indian opener Murali Vijay suffered an injury during Australia’s tour to India earlier this year and because of that he even missed the three-match Test series and was dropped from the side thereafter.

Now, when Sri Lanka is touring India for a 3-match Test series, Vijay made a comeback in the squad but was not picked in the playing XI for the first Test at Eden Gardens.

Vijay was included in the playing XI in the Nagpur Test and Vijay played a gem of an innings to raise his 10th Test ton and the seventh century at home. It is also the same venue where Murali debuted in Test cricket in 2008 against Australia. On Friday, he resumed his innings on 11 on day two of the second Test with a boundary on the very first ball and managed to threaten the Sri Lankan bowlers. Apart from a dropped chance, he looked in complete control of his innings.

BCCI took to Twitter and shared a small video clip of Vijay celebrating his century, they tweeted, “@mvj888 celebrates as he brings up his 10th Test ton. This is his first against Sri Lanka #INDvSL”.

.@mvj888 celebrates as he brings up his 10th Test ton. This is his first against Sri Lanka #INDvSL pic.twitter.com/fBqe3TqaCA 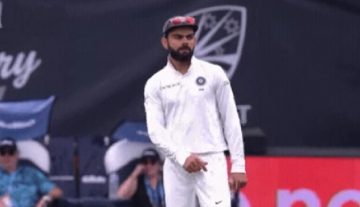