On Friday night, Bangladesh and the hosts Sri Lanka met in the sixth match of the T20I tri-series Nidahas Trophy at R.Premadasa Stadium (Colombo). It was the superb exciting encounter where Bangladesh snatched the match in the last over through a dramatic finishing knock by Mahmudullah.

It was the virtual semi-final for both teams, as the winner of the match will play the final against India on this Sunday. Bangladesh decided to bowl first after winning the toss. After went down to 41/5, Sri Lanka managed to score 159/7 at the end of 20 overs, thanks to the twin half-century by Kusal Perera (61) and the skipper Thisara Perera (58).

In reply, Bangladesh chased down that target but dramatically. There was a lot of drama in the last over when Bangladesh was on 148/7 at the end of 19 overs. Here is the short description of the last over.

Before the first ball, the set right-handed batsman Mahmudullah was in the non-striker end with 31 runs while left-handed Mustafizur Rahman was facing his first delivery of the match.

On the other hand, Sri Lankan left-arm pacer Isuru Udana was ready with the ball whose bowling figure at that time was 2-0-14-1.

First ball: A short delivery on middle and leg which Mustafizur totally missed to play a pull shot. The ball went to the keeper, while both batsmen thought for the run but finally pulled back. Sri Lanka appealed for a caught behind and then reviewed but that was struck down.

Second ball: Another short delivery and this time outside the off-stump. Mustafizur again missed after going to play a pull shot but this time they went for single despite the wicketkeeper caught the ball. It was a very easy run-out for Sri Lanka to the non-striker end as Mustafizur was dismissed on a duck.

On the other hand, Mahmudullah was demanding for a no-ball due to the second bouncer in that over. But, it was dismissed by the umpires as they stayed on their decision. It raised some chaos for a while.

Bangladesh skipper Shakib Al Hasan instructed the on-field Bangladeshi players to come off the field. However, later it was sorted out while Shakib returned to the dressing room.

Third ball: A full-length wide ball at outside the off, Mahmudullah played into the gap over the cover for an important four.

Fifth Ball: Full on middle and leg, Mahmudullah punished that with a flick over backward square leg for a six. The Match Over.

Bangladesh won the match by 2 wickets with the only ball to spare. After winning this match, Bangladesh qualified for the final where they will meet against India on this Sunday night at the same venue (R.Premadasa Stadium, Colombo). 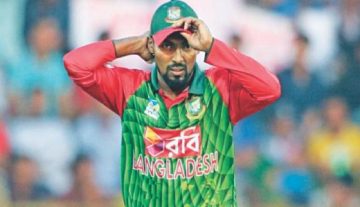