The youngs Pakistan protege, Babar Azam has once again compared with the Indian skipper, Virat Kohli after his unbeaten fifty on the opening day of the first Test against England on Wednesday. When the day was called off due to bad light at Old Trafford, Pakistan was at 139-2 and Babar was at 69 not out and Shan Masood unbeaten on 46. But southpaw opener was given two lifelines on 45 by England wicketkeeper Jos Buttler either side of a lengthy rain break, with off-spinner Dom Bess the unlucky bowler on both occasions.

Babar has now reached the record of scoring a half-century in five successive Test innings, with his previous five matches yielding four centuries. Talking about him while commentating on Sky Sports, Nasser Hussain said, “If this lad was Virat Kohli, everyone would be talking about it but because it is Babar Azam, no one is talking about it. He’s young, he’s elegant, he’s got all the swagger.”

He further added, “They keep going on about the ‘Fab Four’ (Kohli, Australia’s Steve Smith, New Zealand’s Kane Williamson, and England captain Joe Root) — it’s the ‘Fab Five’ and Babar Azam is in that.”

Pakistan were 43-2 when Babar came out to bat after the dismissal of the skipper, Azhar Ali, who fell lbw for a duck to Chris Woakes. Babar started cautiously but after lunch, he played some mesmerizing shots during his 70-ball fifty featuring nine fours.

Talking about the opening day, Masood said, “The game is pretty funny…you get an element of fortune every now and then. No one means to miss them. He’s very capable of doing something very special for us tomorrow.”

The conditions favored England’s four-man fast bowling attack, but Azhar’s decision to bat first was understandable given Pakistan had decided to field two leg-spinners in Yasir Shah and Shadab Khan, who are expected to be more effective on a wearing pitch.

ALSO READ: Suresh Raina Points Out The Importance Of Fitness During Lockdown

Explaining the same, Masood said, “We always knew the new ball was going to be a struggle in England. It’s not an easy gig being an opening batsman in this country but with it comes an opportunity to give the team a good start, especially when you bat first.” 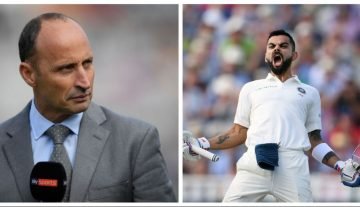 Article
By CricShots - Aug 21, 2018
Nasser Hussain Feels Virat Kohli Is The Greatest Cricketer On The Planet