The flamboyant Indian all-rounder, Hardik Pandya knows various ways of always hogging the limelight not only as a cricketer but also with his personal life attracts a lot of attention. He has come in news again as he has reportedly dating actress Natasha Stankovic and things look very serious at the moment.

In the past, Pandya has been linked with various Bollywood actresses and models. He was linked with the likes of Elli Avram, Urvashi Rautela and Esha Gupta. However, none of those rumored relationships became very serious. But the current one with Natasha looks really serious as some of the reports have suggested that Pandya has also involved his family now in the relationship.

According to a report in Spotboye, Hardik has introduced Natasha to his parents at his house earlier this year in May. While the meeting was quite private, it was the first time she met his whole family together. Reportedly, the all-rounder’s family seems to have no issues with the relationship and have given their thumbs up.

Natasha is a Serbian actress and dancer and is based in Mumbai. She made her Bollywood debut in Prakash Jha’s Satyagraha with an item number and later rose to fame with her one month stint in the Bigg Boss house in Season 8. She garnered more attention for her role in the song DJ Wale Babu.

Natasha also did a cameo in Shah Rukh Khan and Anushka Sharma’s Zero. Currently, she is contesting in season 9 of Nach Baliye with her ex-boyfriend Aly Goni. She was earlier dating Aly Goni and was even linked to her Bigg Boss co-contestant Priyank Sharma. The entertainment portal had also reported that Hardik and Natasha were spotted in Café 145 Bandra. The two were at the cricketer’s cousin’s party.

However, Hardik has been sidelined for at least 4-5 months after undergoing back surgery. He has been having some back issues since last year’s Asia Cup. He missed the West Indies tour after the World Cup before making his comeback during the T20I series against South Africa. However, he has soon ruled out of action again before undergoing the surgery. 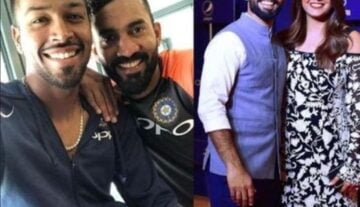