Australia pacer Nathan Coulter-Nile might miss the upcoming Ashes series against England after breaking down with another back injury. Coulter-Nile, who had been expected to be one of the four pacers selected in the Australian squad for the first Test in Brisbane starting on Nov. 23, has been ruled out for an indefinite period of time.

He further added, “Whilst this is a setback, the good news is that it has been picked up early so we are only considering a short break from bowling while we monitor him. “We expect he will have further scans over the next month which will determine when he can return to bowling.”

It can be a huge loss for the pacer, who is yet to play a Test match despite playing 21 ODIs and T20Is due to series of injuries he had suffered in his career. He would likely have been the fourth-choice pacer in the squad behind Mitchell Starc, Josh Hazlewood, and Pat Cummins.

However, with the Gabba wicket traditionally providing some assistance to pacer he also could have been in the attack to make his Test debut in Brisbane. Tasmania’s Jackson Bird has been withdrawn from his side’s Sheffield Shield match to join Starc, Hazlewood, and Cummins in Brisbane for a pre-test training camp. 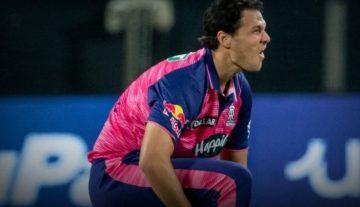