Currently, one of the biggest IPL rivals, Royal Challenger Bangalore (RCB) and Mumbai Indians (MI) at the M Chinnaswamy Stadium in Bangalore. After winning the toss, the RCB skipper, Virat Kohli asked the visitors to bat first. Similar to the last game for Mumbai, Rohit Sharma came out to bat with Quinton de Kock for the opening position.

During the toss, the MI skipper, Rohit revealed that they have made two changes to their squad as Ben Cutting and Rasik Salam made way for Lasith Malinga and Mayank Markande. On the other hand, RCB made no changes to their squad. Mumbai started really well as Rohit and De Kock added 52 runs in the batting powerplay itself, but in the 7th over itself, they lost the latter and the credit for that goes to Yuzvendra Chahal.

WATCH – Hardik Pandya Smashes Siraj Out Of The Ground

Umesh Yadav dismissed Rohit Sharma by in the 11th over, then came Yuvraj Singh. Who was the highest scorer for Mi in the last game. The 13th over of the game was started by Chahal and Yuvraj smashed him for three-consecutive sixes on the first three balls itself before getting dismissed on the fourth ball of the over.

After Yuvraj’s dismissal, Mumbai crumbled as they lost, Surya Kumar Yadav, Kieron Pollard and Krunal Pandya in quick succession and soon they were reeling 172/7 at the 19-over mark. However, Krunal’s dismissal was a special one was Navdeep Saini took a fabulous catch at the boundary line to dismiss him.

On the third ball of the 17th over, Krunal hooked the short ball, but Saini judged well to take a fine catch at fine-leg as he jumped and took the catch calmly over his head and keeps his balance, ensuring that he remains inside the rope and Mumbai are losing their way. 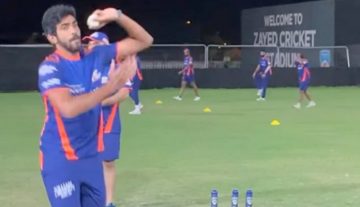