Days after becoming the fifth Indian cricketer to sign a contract to play in the County Championship this year, fast bowler, Navdeep Saini made headlines on his competition’s debut with Kent, returning with the bowling figures of 5-72 against Warwickshire on Wednesday. With Saini’s recent heroics, the Indians continue to sparkle in England.

There have been five Indian cricketers — Cheteshwar Pujara, Washington Sundar, Krunal Pandya, Umesh Yadav, and Navdeep Saini — who have signed a deal with different county clubs this season. Saini, who is due to play a couple more County Championship matches and five Royal London Cup games, was the last among them.

Navdeep Saini made his debut in the ongoing Kent Cricket Club fixture against Warwickshire, but like most of his teammates, particularly Pujara, he impressed one and all in his debut itself. After being folded for 165 in the first innings, under the captaincy of Sam Billings, Kent needed someone from the bowling unit to inspire.

ALSO READ: Phil Simmons Reveals The Key To Hold The Windies Together Against India

At stumps, Kent reached 198/4 in the second innings, and hence, they are having a lead of 138 runs against Warwickshire. Similar to Saini, Sundar grabbed a five-wicket haul on his county cricket debut with Lancashire. While Pujara, who is currently captaining Sussex for the first time, hit a magnificent double hundred –his third in seven outings with the club.

Here is the video of the 5-wicket haul from Navdeep Saini:

X and Y happen to be two very elegant batters. Y's Test debut was X's last. Incidentally, both share the record for the highest individual score made by a batter from their country at a famous overseas venue. Name them #CricketTwitter #CricketQuiz 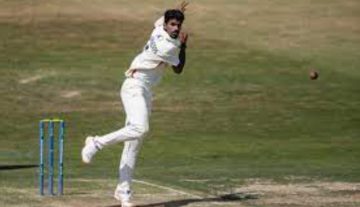