The Indian skipper, Virat Kohli brought up his 27th Test century and 70th ton across the formats on Day Two of the historic day-night Test between India and Bangladesh at the iconic Eden Gardens in Kolkata on Saturday. With the hundred, Kohli went past former Australia skipper Ricky Ponting’s tally of 19 Test centuries as captain.

The list of most Test centuries as a captain has been led by former South Africa captain Graeme Smith with 23 centuries and Kohli now has scored 20the Test ton as the Indian skipper. Moreover, Kohli became the first Indian skipper to go past the 5000-run mark in the longest format of the game on Friday.

Virat Kohli, the first Indian to score a hundred in day-night Tests, now has 41 centuries in 188 innings across formats as the Indian skipper. He is now at the top of the list alongside Ponting, who did so in 376 innings.

Kohli equaled Sachin Tendulkar to become the second-fastest (141 innings) to 27 Test centuries. The 31-year-old also became the fastest (439 innings) to 70 international centuries. He is followed by Tendulkar who reached 70 tons in 505 innings followed by former Australian skipper Ricky Ponting who took 649 innings.

However, Kohli hasn’t given that ‘here you go’ moment too often this year. This was only his second century of 2019. The other one was a mammoth 254-run effort against South Africa in Pune. The lack of hundreds, however, doesn’t mean he has been out of touch. He has an average of over 70 in 2019. But for a country so used to Kohli milestones and centuries, this year has been a bit below par. On Saturday, Virat decided to end the year with a bang.

Seeing the captain on attack mode not just netizens, Kohli even got Michael Vaughan calling him the ‘best across all formats’.

Here are some more reactions to his century:

Hundred stats are great and all, but the most amazing set of numbers in Kohli’s career is he averages more than fifty in all three international formats. That is RIDICULOUS.

Kohli has gone to No.2 on the list today! #INDvBAN pic.twitter.com/EOaI6QqLMF

Kohli made a century

Most Dominat Batsman the world has ever seen 👑 pic.twitter.com/zuEw7B01wr

Virat Kohli is a run machine no matter whether it's a white ball, red ball or pink ball. 🙌👏 #PinkBallTest pic.twitter.com/DUQoqwEDoX 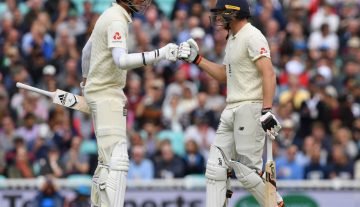 Match Report
By Sandy - Sep 9, 2018
Eng vs Ind (Fifth Test): Day Two – India sturggled the most day as England returned to the game in brilliant way