After whitewashing New Zealand in the T20I series, India is locking horns with the Blackcaps in the first of the three-match ODI series at the Seddon Park in Hamilton. The hosts decided to bowl first after winning the toss and the men in blue continued to show their batting prowess on the tour. This time it was Shreyas Iyer who notched up his maiden ODI century and he made century partnerships with KL Rahul and Virat Kohli to reach a humongous score of 347 runs after 50 overs.

The debutants, Prithvi Shaw and Mayank Agarwal added 50 runs for the opening wicket in just eight overs. Soon, Colin de Grandhomme nipped out Shaw in his very first over to draw the first blood after which Tim Southee, not with his best delivery, sent back Agarwal. Suddenly, India was reeling at 54/2 in the ninth over and needed Kohli and Iyer to rebuild the innings.

Kohli undoubtedly was at his best taking the toll on the bowlers as he played another gritty knock. Iyer though took his time early on and at one stage, but he stayed in the middle and milked the runs smartly. Meanwhile, the Indian captain got to his 58th ODI half-century and looked set for another ton.

The century partnership between the two batsmen also came up and things were looking ominous for New Zealand. But Ish Sodhi came into the attack and yet again, Kohli got out to leg-spinner failing to read the googly which sneaked past his defense and disturb the sticks. Then, Iyer decided to take control along with Rahul as the latter played another brilliant knock of 89* at no.5.

Iyer and Rahul started scoring boundaries at will and the former reached his maiden three-figure mark in international cricket as the fourth-wicket stand flourished. Rahul and Iyer added 136 runs together in just 101 deliveries for the 4th wicket. The latter got out soon after reaching his ton but even then Rahul continued playing his shots. Kedar Jadhav soon joined in and scored 26 off just 15 deliveries.

India finished on 347 runs for the loss of four wickets. For New Zealand, Tim Southee picked two wickets but conceded 85 runs while Hamish Bennett was taken apart for 77 runs in his 10 overs.

India's no 4 scores a century. We have waited a while to hear that! #ShreyasIyer

As the man scores his maiden ODI century, let's not forget the struggles of Shreyas Iyer. #NZvIND pic.twitter.com/k4jM0NVURP

Congratulations @ShreyasIyer15 for your first ODI ton. You have shown the world that if one keeps trying, uska time zarur aata hai! #INDvNZ #INDvsNZ pic.twitter.com/c73f68CLZq

Well done @ShreyasIyer15 on your first ODI Ton. Many more to come… #NZvIND

How often does Jadhav do this? We don't give him enough credit for playing a difficult role

Not to undermine the credentials of those selected, but @klrahul11 — in blazing form — not being in the Test squad seems a travesty

Batted twice at 5, Crossed 80 on both occasions. #KL

Unusual but brilliant bowling from Bennett. In the end it was a tight 50th over, and that is all that matters.#NZvsIND #NZvIND 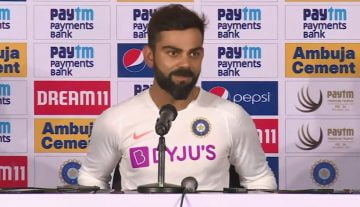