ALSO READ: Netizens Applaud As Rohit Sharma Smashed 26 Runs In An Over

Chasing a massive score on the board, Martin Guptill and Colin Munro have started things well but surprisingly, they failed to carry the momentum with them and Guptill was dismissed owing to a blistering catch by Sanju Samson in the deep while Ravindra Jadeja dismissed Colin Munro to deepen the sorrows of the hosts.

Like India, New Zealand sent Mitchell Santner up in the order but the southpaw failed to execute plans. However, Williamson kept on smashing the Indian bowlers and kept the required run-rate under check. He was the Blackcaps for the team in the middle, who kept the Indian bowlers on their toes. However, he lost his wicket to Mohammed Shami in the final over when they needed just 3 runs to win, but Shami took the game into super over.

Earlier in the match, Rohit came out all guns blazing and smashed Hamish Bennett to 26 runs in an over, which also saw him finishing his half-century. The Indian skipper, Virat Kohli, and Shreyas Iyer smashed a few boundaries in the middle overs to balance the innings for India. Just when things looked in control for the men in blue, Iyer was dismissed by Santner while Kohli failed to give a powerful finish to the innings. In the end, all they managed was 179 on the board with the help of Manish Pandey and Ravindra Jadeja.

In the super over, Williamson once again stood tall for the team but Rohit proved his class by smashing two sixes off the final two balls to seal the series when India needed 10 runs of the last two balls. All in all, it was an incredible game between New Zealand and India at Seddon Park. Now, both teams will travel to Wellington for the 4th T20I of the series.

Went for six off the first ball, still kept his cool to take his team to super over. Impressive from @MdShami11 in the crucial situation. #NZvIND #Superover

What a game so far #INDvsNZ 🙌🏻

A Rohit flier, a rare off day for Bumrah, a Kane Williamson masterclass and now a super over!

We’ve seen it all and it’s not over yet. #NZvIND

Ok a Super-over now!!! This game has it all! #NZvIND

10 needed off last two balls in super over and @ImRo45 went for two sixes! What a thriller! Top efforts from Rohit, @klrahul11 , @imjadeja , @MdShami11 and others. #NZvIND 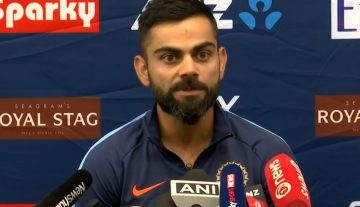 Article
By Shruti - Mar 4, 2020
Virat Kohli Gives a Hint of a Change in the Pace Attack