New Zealand fast bowler Kyle Jamieson is currently taking part in the second and the final  Test against India at the Wankhede Stadium in Mumbai. In the opening day’s play, he couldn’t pick up a wicket as left-arm spinner Ajaz Patel took all the wickets on a turning track at the iconic venue. In the meantime, Jamieson faced an issue on the morning of Day 2 regarding laundry.

New Zealand Manager Mike Sandle was seen helping Jamieson by trying to dry equipment using the fan. The official Twitter handle of the Black Caps shared the picture of the manager solving the laundry issue with the ceiling fan on the social media platform.

In the first Test at the Green Park in Kanpur, Kyle Jamieson became the fastest Kiwi bowler in the country to accomplish the 50-wicket milestone in Test cricket. The speedster only took nine Tests to reach the accomplishment. He surpassed the milestone after he rattled Shubman Gill’s woodwork on the third day of the first Test, thereby breaking Shane Bond’s feat.

Thereafter, he conjured praises from Simon Doull, the former New Zealand fast bowler. While hoping for the pacer to have a long Test career, Doull said that Jamieson has filled in the missing piece of the Black Caps’ pace attack.

Talking about the same, Doull said, “Incredible for Kyle. I guess when you start in such incredible fashion, it’s hard to continue down that road but he just has. He has played Test matches against some really good sides like England and India quite a few times, Pakistan, West Indies. He just continues to do the job. For me, it is an incredible start to a career which hopefully, from a New Zealand point of view, goes for a long time.”

ALSO READ: Rohit Sharma To Become Deputy Skipper In Tests Ahead Of Rahane?

He also added, “I think what he’s done is that he has added a great element to what was already a very, very good New Zealand bowling attack. Maybe it was a slight piece missing from the Southee-Boult-Wagner combination. I know Colin de Grandhomme did a great job. But Kyle creates bounce, unsettles batsmen, hits them on the gloves… (and) he’s got the swing as well to go with it.” 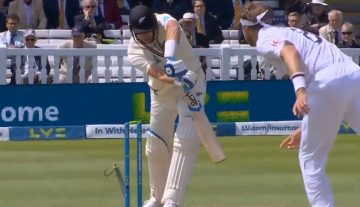