Kolkata Knight Riders (KKR) has managed to register another comprehensive win in the UAE leg of the Indian Premier League (IPL) 2021 as they defeated Sunrisers Hyderabad (SRH) by six wickets. This much-needed win has also kept their qualifying hopes alive. It was an all-around performance from KKR as first their bowlers restricted SRH to just 115.

Later, opening batsman, Shubman Gill played a phenomenal knock of 57 runs which helped KKR to win the game with a couple of balls to spare. Apart from Gill, even Nitish Rana scored a handy 25 runs. In his short stay at the crease, the southpaw hit three boundaries in his knock and looked threatening to finish which chasing such a small target Jason Holder removed him.

Before Nitish Rana was out, he was guilty of breaking a camera off the bowling of Holder. The incident occurred, when the West Indian bowler had come into the bowl the 17th over. Rana was looking set with 21 runs on board. In an attempt to dismiss Rana, Holder banged a ball in short to which the southpaw was quick enough to pounce on it and pulled it ball for a boundary. But amidst all that, the ball had just bounced before reaching the boundary ropes and crashed onto a camera.

Rashid Khan, who ran after the ball failed to stop the boundary and the ball which hit the camera lens. The leg-spinner was bemused by the ball smashing the camera lens and inspected it. Here is the video of the incident:

With this win, KKR has now moved up to fourth on the points table with 12 points on board. The victory against SRH has given them hopes of qualifying for the playoffs. KKR’s bowlers were spot on with their line and lengths against SRH batters and choked them. Tim Southee, Shivam Mavi, and Varun Chakravarthy all picked up a couple of wickets each and marinated a good economy rate.

Later, Gill held one end and kept the scorecard ticking in the run-chase of 116. He lost his opening partner Venkatesh Iyer and number three batter Rahul Tripathi for eight and seven runs, respectively but that did not stop him from playing shots on the loose deliveries, which the SRH bowlers bowled. 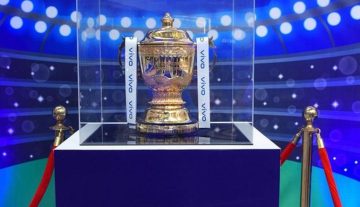