Under the leadership of Virat Kohli, Team India has suffered its first series loss across the formats since the ICC World Cup 2019 and it was New Zealand again against whom they succumbed in the second ODI at the Eden Park in Auckland. Chasing a decent target of 274 runs, India lost the game by 22 runs as the hosts have now taken an unassailable 2-0 lead in the three-match ODI series

Initially, it was Kohli, who won his first toss on the tour and opted to bowl first in Auckland. But, what followed wasn’t great for India, as Martin Guptill and Henry Nicholls added as many as 93 runs for the opening partnership. Then came the breakthrough from Yuzvendra Chahal when Nicholls was trapped in front of the wicket. It was quickly followed by the dismissal of the latter when Shardul Thakur affected a runout to dismiss Guptill.

It triggered the sudden downfall of New Zealand, as they quickly lost Tom Latham and James Neesham to give complete advantage to the Indian team. Much like previous games, it was Ross Taylor once again, who saved New Zealand from further embarrassment. He alongside Kyle Jamieson added 76 runs for the 9th wicket. New Zeland finished their quota of 50 overs with the tally of 273/8.

During the chase, Prithvi Shaw started things in a flash by scoring three boundaries in the first over. However, he failed to score consistently as New Zealand’s debutant Kyle Jamieson bowled a brilliant Inswinger to get rid of him. The other opener Mayank Agarwal failed yet again to make things tough for India.

Just when Virat Kohli and Shreyas Iyer were looking steady, Tim Southee gave a perfect breakthrough by removing the Indian skipper after a solid setup. He was quickly followed by KL Rahul, who was dismissed by Colin de Grandhomme. The wicket of Kedar Jadhav further made inroads to India’s lower order before Jadeja joining Iyer in the middle.

They both played well by adding 33 runs before Shreyas throwing his wicket after completing his half-century in the 28th over. It was followed by the wicket of Shardul Thakur, who failed to defend Colin de Grandhomme. Just when things looked bleak, Navdeep Saini and Ravindra Jadeja added 79 runs for the 8th wicket to bring India back into the game. But soon they both got out and the men in blue got bundled out for 251 in the 49th overs.

Here is how Twitter reacted to India’s series loss:

Can understand Jadeja trying to take it deep but he had to play the shots for India to win. Was a disappointing batting performance today.

At least now can the team management shelve the Jadhav experiment? Move on.

Courageous efforts by Saini and Jadeja end in vain. Too many top order wickets lost cheaply. Kudos to New Zealand for clinching the ODI series. After the 0-5 whitewash in T20s this looked unlikely. Terrific regrouping and comeback

India would rue the soft dismissals with the bat, almost all got themselves out.

Losing ODI series is not a big deal but India lost a golden opportunity of series wins across formats on an away tour. #NZvIND #INDvsNZ #INDvNZ

Jadeja is the Kaleen bhaiyya of Indian cricket…
Garam krke chhor dete hn!
Great Effort though from Jadeja and Saini#NZvIND

Good fight by Jadeja and Saini, but tough luck for them. #NZvIND #indvnz pic.twitter.com/7lZyNbAUWF

Jadeja tried to take a leaf out of the Book of Dhoni. Didn't work today. #NZvIND

Was this live or replay of the Worldcup match ??#NZvIND 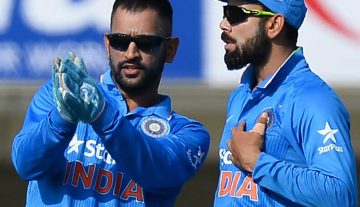 Article
By Aditya Pratap - Feb 1, 2018
Kohli and Rohit went against Dhoni to waste a review