The Indian skipper, Mithali Raj has witnessed various achievements in her illustrious career cricketing achievements to her name in her illustrious 23-yearo-ld career. She has been instrumental in putting women’s cricket on the world map and at the same time she had captained the Indian women’s team to two World Cup finals in the 2005 and 2017 editions respectively.

Mithali Raj is currently leading India at the ongoing ICC Women’s World Cup 2022 in New Zealand where Team India is fighting a tough battle to qualify for the semi-finals. Meanwhile, a biopic which is made in her name titled ‘Shabaash Mithu’ is one of the highly-anticipated movies of this year, and the producers have now release the movie teaser.

Taking to the micro-blogging site, Bollywood actress Taapsee Pannu shared a 56-second video of her next project Shabaash Mithu. At the end of this short video, Taapsee can be seen perfectly emulating the batting mannerisms of Mithal Raj. She has titled it as “In this Gentlemen’s sport, she did not bother to rewrite history, instead she created HER STORY!”

ALSO READ: Saba Karim believes MS Dhoni is likely to be seen for the last time in IPL 2022

The upcoming biographical sports drama film has been produced by Viacom 18 Studios and directed by renowned Bengali director and screenwriter Srijit Mukherji. As of now, the official release date of the movie is yet to finalized.

Coming back to the Women’s World Cup, Mithali Raj became the first-ever women’s cricketer to feature in six World Cups. She had retired from T20Is in 2019 to prolong her ODI career but more importantly to participate in the showpiece event. This could well be her final tournament and she would be leaving no stone unturned in order to finish her glorious career on a high by lifting the coveted trophy on April 3.

Mithali Raj is also the only women’s cricketer to surpass the 7,000 run mark in Women’s ODIs and was also the first batter to register seven straight half-centuries in the 50-over format. 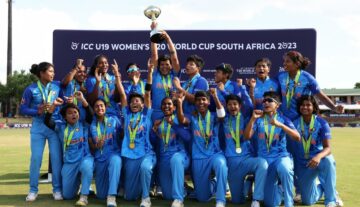