Just one year ago, on 20th July 2017, Indian women cricketer Harmanpreet Kaur played a marvelous knock which was unforgettable for every Indian cricket fans. That innings helped the Indian women’s cricket team to reach the final of 2017 ICC Women’s World Cup in England.

After winning the toss, Indian women’s skipper Mithali Raj decided to bat first in the 42-over per-side game, due to the delayed start of early rain. Indian women did not have a good start as both the openers were dismissed on just 35 runs on the board (35/2). Since then, Harmanpreet played a massive knock and provided some crucial partnerships that helped the team to put a good total on the board.

None of the Aussie bowlers was able to pick more than one wicket in that innings.

In reply, Australia women had not a good start as they were 21/3. While Ellyse Perry (38) and Elyse Villani (75) helped the Aussie team to make a comeback in the game, Alex Blackwell fought till the end of the game.

After the 105-run fourth-wicket partnership between Perry and Villani was broken, Australia women suffered a major batting collapse as they went down to 169/9 in 32.3 overs.

As it was seeming almost impossible for the defending champions, Blackwell displayed an impressive fight as she scored 90 runs and put a brilliant 76-run partnership with Kristen Beams (11*) for the last wicket, but finally fell short of 36 runs from the Indian women’s total.

Kaur was awarded the Player of the Match as Indian women reached the final of Women’s World Cup for the second time after 2005, where they had fin shed as a runner-up after losing against Australia women. However, Indian Women just failed to win the 2017 Women’s World Cup as they lost against the hosts England women in the final by just 9 runs. 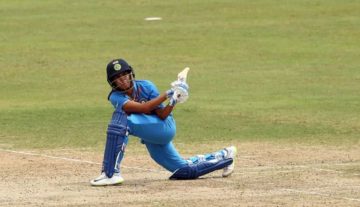 News
By SMCS - Jun 3, 2021
“I Was Completely Destroyed”: Veda Krishnamurthy