12th March 2006, The ‘Bullring’ Wanderers Stadium, Johannesburg witnessed the greatest ODI ever as South Africa chased down the then World-record total of Australia in a heart-stopping fifth and decisive encounter of the bilateral series.

The record-breaking match at the Wanderers had so many twists and turns that even a world-class thriller shall never be able to produce. A tussle of grand proportion saw the balance of the match oscillating constantly between the two teams, tipping only slightly at last moment.

Australian Captain Ricky Ponting won the toss and chose to bat first on the batting-friendly track. Opener Adam Gilchrist made full use of the short boundaries and Australia raced to the 100-run mark in the first 15 overs itself.

Ponting batting at number 3 found an able support in the conservative opener Simon Katich and both prepared the launching pad for Kangaroos to take off. By the end of 30th over, Australia’s score stood at 216/1. The convention in ODIs is to double your first 30 overs score in the next 20 overs.

Adhering to the convention faithfully, Australia pressed the acceleration button and rocketed themselves past the 400-run barrier which no team had ever passed in the ODIs so far. Ricky Ponting’s career-best 164(105) and Michael Hussey’s 81(51) demolished the classy Proteas attack to pieces.

Three months prior to this game, New Zealand had chased 332 runs against Australia in Christchurch which was the highest chase in ODIs ever. South Africa here had to score 103 runs more. A sober man in his complete sense would give himself no chance of overcoming this. Only a drunk would try and try he did.

Herschelle Gibbs was still suffering from a hangover after a night out before this match. The management contemplated leaving him out of the team but the batting conditions at the Wanderers made them treat Gibbs kindly. Gibbs promptly repaid by playing his greatest knock ever.

South Africa lost their opener Boeta Dippenaar at the score of three runs in the first eight balls. Next batsman to walk in was Herschelle Gibbs. 142 minutes later, when Gibbs got out after a legendary 175(111), South Africa was 299/4 in 31.5 overs needing further 136 runs in 109 balls.

With the doughty Mark Boucher standing tall at one end, other South African batsmen kept pinching crucial runs. The most notable contribution came from Johan van der Wath who provided momentum with his 18-ball 35.

When the last over began the ghosts of 1999 World Cup semi-final started looming over the South African team as it needed seven runs in six balls with two wickets in hand. Brett Lee stormed in with all his pace but it was Boucher’s boundary over mid-on on the second-last ball of the match that sealed the most miraculous chase of them all.

The scene was hysterical. No one in their wildest dreams had thought of Australia scoring 434 runs and still ending up on the losing side. Nothing happened on that day made any sense. The facts are indeed stranger than the fiction. 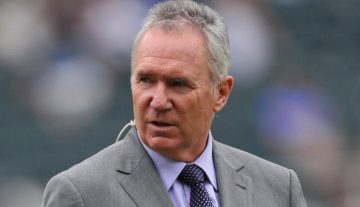