After Team India’s sensational performance in the first three One-Day International matches against New Zealand, a below average outing hurt India’s chances to complete a whitewash on foreign soil. India’s batting order crumbled for 92, where no batsmen crossed 20-run mark. Number 10 Yuvzendra Chahal was the top scorer with 18 not out.

Since regular captain Virat Kohli has been rested, young prodigy Shubhman Gill was given a chance. Meanwhile, former England skipper Michael Vaughan was unhappy with Rishabh Pant’s absence from the team and he expressed his agony on Twitter.

His tweet reads; “Why isn’t Rishabh Pant getting a go in the ODIs?”

The young wicketkeeper was rested by the Indian selectors after a tough Test series against Australia. Currently, he is playing with India A against England Lions, where he won the fourth match for his team. In the meantime, former English player Owais Shah responded to Vaughan’s tweet and pointed out the reason, which is keeping Pant at bay from the limited-over team.

Shah replied “Probably because the best wicket-keeper batsman in the world is keeping him out of the side. #record #worldcuparoundthecorner.”

Probably because the best wicket keeper batsman in the world is keeping him out of the side. #record #worldcuparoundthecorner

Despite being in the twilight of his career, Mahendra Singh Dhoni remarks as the best wicketkeeper in the world cricket currently, who is expected to keep the wickets for India in the forthcoming ICC Cricket World Cup in England. However, he didn’t have a memorable 2018 with the bat but he stopped all the talks about his retirement with the commencement of 2019. So far, Dhoni has scored three half-centuries this year and is dismissed only once.

India lost the fourth ODI game in Hamilton by a margin of 8 wickets with 212 balls to spare. Veteran fast-bowler Trent Bolt didn’t allow Indian batsmen to settle down on a fast-bowling assisting pitch. He ended up with the figures of 10-4-21-5 and concluded India’s innings for 92. New Zealand was off to a flier and despite losing a couple of wickets, they reach the target without any problem. 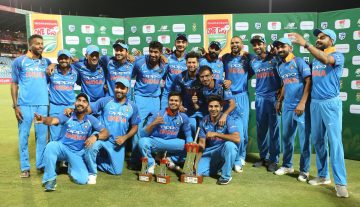