A news reporter has always been expected to keep his/her calm while on air. But after the Asia Cup game between Pakistan and Afghanistan, a Pakistani news reporter lost his cam as he was caught showing middle-finger to the camera as he was unknown that the coverage had gone live by then. It was a celebratory moment for Pakistan cricket fans as Shoaib Malik had kept his cool and won them the thrilling game for them.

Pakistan got over the line while chasing a stiff target of 257 runs as the Afghanistan team gave a tough fight while defending the total. They had almost botched up the chase despite half-centuries from Babar Azam and Imam-ul-Haq. But Malik used his experience and didn’t let the game from their hands eventually finishing it in the final over of the chase.

ALSO READ: There is a good news for Sachin Tendulkar’s fan

The incident happened on Pakistani news channel Samaa TV when their anchor was delighted after their team’s victory but was not aware that he is on air. During a conversation with one of his colleagues, he showed middle-finger to someone in the studio and suddenly realized that the coverage had started only to get back to his duties with a serious face.

When panel producer is in so much hurry to switch!!! RIP Journalism 👇 pic.twitter.com/6NeYRwxNvB

However, the joyous atmosphere lasted for a short period of time for Pakistan as the arch-rivals thumped them for the second time in four days in the ongoing Asia Cup on Sunda. Sarfraz Ahmed and his men didn’t really turn up for the encounter as Team India defeated them by nine wickets in a one-sided affair. The match between Bangladesh and Pakistan will be a virtual semi-final a the winner of that match will meet India again in the final.

It will be interesting to see the way they respond to this defeat and play in their next game. On the hand, Bangladesh registered a  confidence-boosting victory over Afghanistan and will be rearing to take on the opposition. 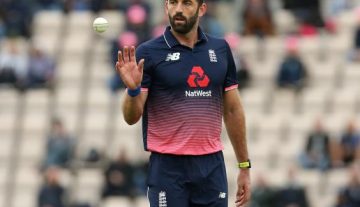 Article
By Shruti - May 13, 2019
ICC confirms Liam Plunkett is clear from ball-tampering offence