Australian captain Pat Cummins bowled a potentially game-changing over on Day 5 of the fourth Ashes Test at the Sydney Cricket Ground on Sunday. With England’s pair of Jonny Bairstow and Jos Buttler looking good to secure a draw for the team, Cummins broke the gritty partnership by first removing the wicket-keeper batter on the score 11, and then bowled a belter of a delivery to dismiss Mark Wood in the same over.

England was chasing a daunting target of 388 runs to win in Sydney but quick wickets in the first session of the final day potentially ended all hopes for the visitors to end a dismal losing streak, which extended to three matches in the current Ashes series.

Here is the video of the two stunning in-swinging deliveries from Pat Cummins:

Who else but Pat Cummins? 🙌

Two lethal inswingers brings two wickets and Australia are up and about! #OhWhatAFeeling#Ashes | @Toyota_Aus pic.twitter.com/2oee4kVhwW

Pat Cummins trapped Jos Buttler leg-before with a full delivery angling into the right-hander, as the England batter attempted to play with a straight bat but missed the line completely. Two deliveries later, Cummins bowled an almost unplayable yorker to Mark Wood that swung towards the batter late.

Earlier, Joe Root and Ben Stokes ground it out in the middle to frustrate the hosts in the second session on Day 5 of the fourth Test. At the tea break, England’s score read 174/4 with Stokes and Bairstow at the crease.

However, Nathan Lyon struck the breakthrough in the final session when he got the priced wicket of Stokes with a delivery which turned sharply away from the left-hander, as the England batter nicked the delivery towards slip. The second session on Day 5 got off to a delayed start due to rain and almost 50 minutes were lost due to rain and wet outfield. 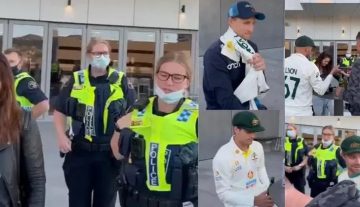