Bhutan all-rounder Mikyo Dorji has said that just registering his name for the auction of the upcoming Indian Premier League 2022 is a big deal for his country. However, Dorji is the first cricketer from Bhutan to register his name for the IPL Auction. Cricket is still one of the growing sports there as archery is their national sport of the country and football is very popular rather than cricket. And, Dorji is working hard to put Bhutan’s name on cricket’s global map too. 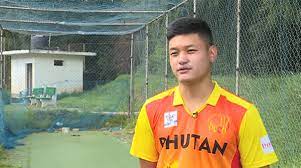 Dorji said that his ultimate dream is to play in the IPL but he also admitted that there is little chance of him getting shortlisted for the next round of IPL auction.

“Playing in the IPL is an ultimate dream for me. People saw that there was one player in the auction list from Bhutan and my friends started calling me. But they don’t know (laughs) that this is just the initial round, and the names are going to be shortlisted further. If I am honest to myself, my name will not be there in the main list after it is trimmed. Anyways, just registering is a big deal for Bhutan,” Mikyo Dorji told the New Indian Express.

Dorji is also the first cricketer from Bhutan to play in a franchise-based league outside the country. He took part in the Everest Premier League for Lalitpur Patriots. However, he said that he could have developed more if his country played regular international games.

“For players like me, more than anything, I missed international cricket, where I could have learned further and developed. In the future, and I hope so, if any franchise picks a player from Bhutan, it will help a great deal here. For example, Bhutan footballer Chencho Gyeltshen plays in the Indian Super League, it has helped a lot. People and parents alike have started to realise that one can make good money and career out of such sports too. The same thing can happen in cricket too if a player from Bhutan is in the IPL,” concluded Mikyo Dorji.