More often than not the Indian Premier League (IPL) has been advantageous for Indian cricketers and this time the beneficiary has been the Indian opener Shikhar Dhawan, who admittedly said that practicing against Afghanistan star spinner Rashid Khan at the Sunrisers Hyderabad nets for the past two years helped him in the ongoing historic Test in Bengaluru.

Dhawan smashed his way to a 96-ball-107 and was especially was in attacking mode against Rashid during his first session century as India finished the day at 347 for 6 on the first day of the historic one-off Test. During the post stumps press-conference, Shikhar said, “One thing (advantage) is that I have faced him (Rashid) in the nets for the past two years as we play for the same IPL team. I am used to his bowling and that was an advantage for sure. It helped me.”

Dhawan was happy that he won the battle against Rashid, he said, “They came back very well in the final session and I am sure they are going to learn a lot of things and go a long way ahead. Of course, I enjoyed my battle with Rashid and I am happy that I dominated. But he is a great bowler and on his day, he will take some serious wickets.”

While he came down the track to the spinners, the batsmen coming later didn’t do that. Dhawan refused to blame them. For Dhawan, attack is the best form of defense and he went with the flow from the start of the innings.

Dhawan concluded, “I have full faith in my process and if you look at my earlier Test matches in Sri Lanka (barring the odd failure in Cape Town), I play with the same positive mindset. I was in good touch during IPL and wanted to continue with it.” 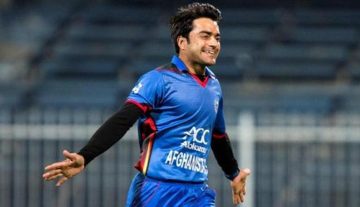