A ferocious line-up and an excellent record in Vishakhapatnam make India the clear favorites for the series win against Sri Lanka in the third and final ODI on Sunday.

Indian team is yet to lose a series at home since the defeat to South Africa in October 2015. On the other hand, the Islanders will be looking to register their first ever bilateral series in India, having lost eight and drawn one.

Skipper Rohit Sharma single-handedly took teh game away from teh visitors in Mohali with a superb double century, his third in ODIs after the team had been outplayed in the series opener in Dharamsala. Team India will look to continue the momentum after a huge win in the second game and seal the series in Vizag.

The hosts lost just a single game at the venue in the seven games played here (with one being washed out) and will hope to keep winning on what has generally been a high-scoring ground. Defeat in Dharamsala barred India from overtaking South Africa in the ICC ODI rankings but now a series win is at stake. Rohit & Co will look to maintain command over the visiting Lankans, having won the Test series earlier.

After being shot out for 112 in Dharamshala, the Indian batting line-up recaptured its mojo as Rohit led from the front. With Shikhar Dhawan chipping in with a half-century and the young Shreyas Iyer announcing himself on the international arena with a knock of 88 in the second ODI, the Indian batting line-up seems to be back in form and would be expected to supply the runs in the series decider.

Also, the middle-order comprising Dinesh Karthik and Manish Pandey will love to score runs with some apt support from MS Dhoni and Hardik Pandya. The bowlers have looked in good form so far and will aim to continue the momentum on what is likely to be a batsman-friendly wicket, going by the records.

Angelo Mathews’ return to form must be heartening news for the Lankans them as is the fact that he is bowling some overs, and with a degree of success too. Upul Tharanga, among the more experienced batsmen in the line-up, needs to step up on the occasion in order to make his team win. The other batsmen including Lahiru Thirimanne, Danusha Gunathilaka, and Niroshan Dickwella, have been irregular and will have to find ways to make sizeable scores.

On the other hand, the bowlers need to make recovery from the horror show as Rohit turned on the heat. Nuwan Pradeep, who was taken for 106 in 10 overs, will look for redemption if he retains his place in the XI while Suranga Lakmal, the hero of the win at Dharamsala, holds the key for Lanka.

While India is unlikely to make any changes in the playing XI that won in Mohali, the visiting side may consider bringing the pacy Dushmantha Chameera in place of Pradeep. The last ODI played in Vizag against New Zealand, saw India registering a humungous win 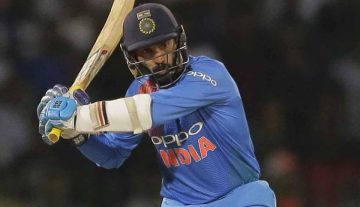