Openers Prithvi Shaw’s century and Mayank Agarwal’s half-century bring back India A team into the fight in the first unofficial four-day Test against West Indies A at The Kent County Cricket Ground (Beckenham).

After India A was bundled out for just 133 runs on day 1, West Indies managed to score 383 before getting all out. On day 2, Sunil Ambris scored a brilliant century of 128 runs while the skipper Shamarh Brooks (91 runs) just missed a well-deserving hundred. Raymon Reifer (52 runs) also scored a half-century at the late of the innings.

At the end of the first innings fights, West Indies had 250 runs lead. Coming from the back-foot position, Indian openers Prithvi Shaw and Mayank Agarwal provided a crucial partnership as they put an unbroken 159 runs partnership for the opening wicket at the end of day 2.

While both the openers were dismissed for the golden ducks in the first innings, they made a strong comeback in the second innings. The 18-year-old Shaw scored a brilliant century in attacking style as he remained unbeaten on 101 runs off just 74 balls with 18 fours and only six.

Meanwhile, the 27-year-old Agarwal also provided a solid batting performance as he remained unbeaten at the end of day 2 on 56 runs off 71 balls (11 fours).

At the end of the day 2, India was just trailing by 91 runs while they have all ten wickets in hands.

Earlier the day 2, the pacer Ankit Rajpoot bagged four wickets as he had the bowling figure of 25.2-9-76-4. Another pacer Navdeep Saini (2/78) and left-arm spinner Shahbaz Nadeem (2/87) picked up two wickets each. Also, Vijay Shankar (1/71) grabbed one wicket in that innings. 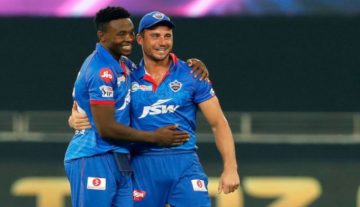