Team India batter Prithvi Shaw posted a cryptic message on his Instagram stories after the squad for the ODI series against South Africa was announced. However, BCCI announced the squad for the three-match series on Sunday with Shikhar Dhawan captaining the team and Shreyas Iyer acting as his deputy. Rajat Patidar and Mukesh Kumar also received call-ups to the squad for the first time in the all-young squad. All the top stars who are part of the squad for T20 World Cup squad have been dropped as well.

Notably, Prithvi Shaw decided to post a cryptic message on his Instagram stories and this made headlines. “Don’t trust their words, trust their actions, because actions will prove why words are meaningless,” said Shaw on Instagram. 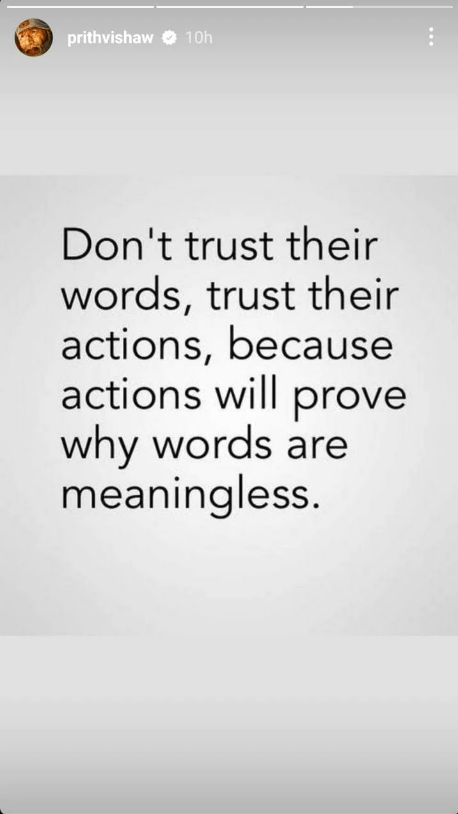 Prithvi Shaw was in good form during the Duleep Trophy and scored a century for West Zone against North-East Zone. He said, as quoted by Cricinfo, that he had been working on his fitness during the off-season.

“This [hundred] is special because it came after a long time,” Shaw said. “After training, and after giving myself time, [I am] coming back on track, which seems very good. I didn’t bat so much during the off-season. I was training with Vivek [Ramakrishna, Strength & Conditioning coach with Shaw’s IPL team Delhi Capitals]. I was training at the BKC [Bandra Kurla Complex, Mumbai]. First, we trained in Delhi and then came back and trained in Mumbai [during the off-season]. Just 12 days before the Duleep Trophy, I started batting just to get back on track with red-ball [cricket]. Otherwise, I was just working on my fitness,” said Shaw.

The squad for the three-match series is as follows:

News
By SMCS - Dec 4, 2022
Rishabh Pant ruled out of the Bangladesh ODI series; no replacement announced