South African wicket-keeper, Quinton de Kock has always been known for his outstanding glovework from behind the stumps and he did a carbon copy dismissal of Rishabh Pant in the first ODI in the 2nd game as well. However, in the 2nd ODI, Venkatesh Iyer was at the receiving end. Iyer was looking settled at the crease and he was looking to rotate the strike with India having lost half their side with nearly ten overs left.

Venkatesh Iyer along with Shardul Thakur was doing well to keep the scoreboard ticking. However, Andile Phehlukwayo was brought into the attack by Temba Bavuma and he managed to get the wicket of Iyer immediately. The credit, however, goes to Quinton de Kock. Phehlukwayo dished out a delivery down the leg side and Iyer attempted to flick.

Iyer failed to make contact with the ball and Quinton de Kock was quick to gather the ball and dislodge the bails. The South African gloveman wasn’t confident of the dismissal earlier and neither did the South African fielders. Replays, however, confirmed that Iyer’s foot was in the air momentarily and de Kock took off the bails at the perfect time to effect the stumping.

With Iyer’s wicket, India’s middle-order woes continued as they have lost their way since KL Rahul holed out after the drinks break. Rishabh Pant’s aggressive knock of 85 runs was the only thing that kept the Indian team afloat. 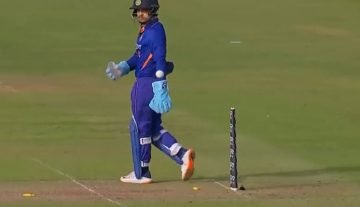 Twitter Reaction
By CricShots - Jun 29, 2022
Ishan Kishan Trolls The Batter Before Stumping, But It Was A No-ball