Mumbai Indians (MI) has continued their winnings momentum in the Indian Premier League (IPL) 2020 by registering another dominating win over Kolkata Knight Riders (KKR) in Abu Dhabi. Chasing a meager score of 149, Quinton de Kock came out all guns blazing as he scored third fifty of the season, while in the first innings, Rahul Chahar scalped two wickets on consecutive deliveries.

After opting to bat first, nothing went in the favor of KKR as their first wicket fell when Suryakumar Yadav took a blinder to send back Rahul Tripathi in the third over. Knight Riders never recovered from the early blow and kept losing wickets at regular intervals. Nitish Rana, Shubman Gill, and Dinesh Karthik all walked back in the next few overs to leave the team struggling at 42/4 in the 8th over.

Andre Russell’s poor form with the bat continued as by the end of the 11th over, KKR was reeling at 61/5, and they looked down and out. However, the newly-appointed skipper Eoin Morgan and Pat Cummins had other ideas. The duo assessed the conditions, which should’ve been done by the top-order batsmen, and as a result, Trent Boult and Nathan Coulter-Nile were taken to absolute cleaners in the last two overs.

Cummins got to his fifty in the last over as well while KKR’s skipper unleashed himself in the last few balls of the innings. KKR posted a fighting total of 148 runs for the loss of five wickets after 20 overs. For MI, Rahul Chahar bowled brilliantly he registered the score of 2/18 while Jasprit Bumrah was at his usual best going for only 22 runs in his four overs.

Chasing 149 to win, MI started extremely well with their openers, Quinton de Kock and Rohit Sharma taking on the bowling in the powerplay. They laid out the exhibition of some sumptuous hitting from the duo. They added 94 runs in less than 11 overs and after the powerplay itself and left no chance for KKR to get back into the game. Shivam Mavi though produced a beauty of a delivery to dismiss Rohit Sharma while Suryakumar Yadav played too many shots before getting out to Varun Chakravarthy.

De Kock kept on toying with the KKR bowlers and of all, the pull shots flying out of the ground were fascinating to watch on the day. He remained unbeaten on 78 off just 44 balls with the help of nine fours and three sixes while Hardik Pandya, at the other end, also eased into a few strokes during his stay. MI went past the winning line in the 17th over itself and hardly broke a sweat.

Here is how Twitterati reacted to MI’s dominating win:

Can we have #MI vs #DelhiCapitals finals already? 🙈 #IPL2020

The way #MI was batting it looked like a completely different pitch
A lot to work for #KKR & their new captain.
Well played @mipaltan for 21st win over KKR- most by an IPL team#MIvKKR

Team's find it difficult to chase but Mumbai Indians making it easy. 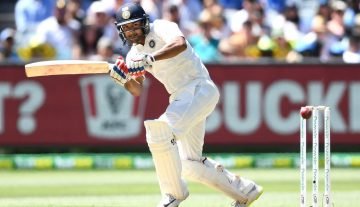 Article
By Shruti - Oct 11, 2019
Mayank Agarwal Shares His Secret Behind the Success