Veteran Indian all-rounder Ravichandran Ashwin looked expressed his unhappiness with the fact that many critics calling the IPL as a money laundering business. Some people have always been critical in their perception of the cash-rich IPL. Many reckons that the money corrupts the cricketers and the focus has changed from hard work to fetching money. However, Ashwin, as per the recent quotes in Times of India, has defended the IPL.

Ashwin remarked that IPL can never play the role of a villain in the Indian team. He noted that it all depends on an individual how he takes the money factor. If taken in the proper way, then it can serve as a motivation to move ahead. He said, “People tend to brand IPL as some sort of a villain to Indian cricket in a lot of ways. It depends how a cricketer address IPL. Any sort of monetary gain that IPL provides is a motivation to move ahead.”

Speaking further about the prestige of IPL, the veteran cricketer remarked that the IPL is indeed a big move by the BCCI. It gives a better lifestyle to the cricketers in terms of financial stability. Also, he was direct in pointing out that money brings confidence on the table for a player. At the very same time, the motivation to play for the Indian team also matters and it depends on the individuals how they prioritize the things.

Talking about the same, Ashwin said, “It [IPL] is a massive move by the BCCI to do a tournament like this because it definitely gives a better lifestyle for the cricketer in terms of money. I am sure nothing brings confidence more than money brings to you. The upbringing of a kid matters a lot. How much it means to him to don those Indian colors and go out there and play and excel as a cricketer plays a big role. I have always looked at excellence, try and get better and win a game. When that is the motive I think money just becomes a by-product.”

In the recent times, the Chennai born cricketer has been seen trying out leg spin variations in the domestic games. Commenting on the same, he remarked that he is trying on expanding his armory and is hence, adding new variations to his style of bowling.

As quoted in TOI, Ashwin said, “I used to bowl good leg-breaks with my off-spin action when I was playing league cricket in Chennai. This is part of my plan going into the IPL. I am trying to build a bigger armory. That is part of it and getting good game time and doing it under pressure is important.” 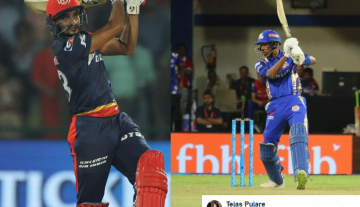 IPL 2018
By CricShots - May 19, 2018
Twitterati Considers Harshal Patel As A Competitor Of Hardik Pandya