Former Indian fielding coach R Sridhar has showered praise on the veteran Indian all-rounder, Ravindra Jadeja’s abilities on the field and called him the best in world cricket. Jadeja is one of the quickest and best fielders India ever had in their squad in all three formats, along with the likes of Virat Kohli and Shreyas Iyer.

R Sridhar complimented Jadeja and former skipper, Mohammad Azharuddin, who he felt was one of the first ones to lay the importance on being a good fielder in the Indian team.

During a recent interview with PTI, R Sridhar said, “It is difficult to judge across different eras and fielding judged by different standards. In the ’80s when Ajju bhai (Mohd. Azharuddin’s nickname in Indian cricket) made his debut, there was no fitness culture in Indian cricket. It kicked in only in the late 90s and Ajju bhai was a stand-out because of his athleticism and because he had great hands, good throw. Probably the bench-mark was different.”

R Sridhar, who served as India’s fielding coach from 2014 to 2021, explained how Ravindra Jadeja is a cut above the rest on the field for Team India and also lauded Azharuddin for his exploits as a fielder.

Elaborating the same, R Sridhar said, “Jadeja is someone who is pleasing to the eye even when he is chasing a ball to the boundary. He is cut above rest in world cricket. So was Azhar during his time. Azhar of 1985 to 1990 would have been a brilliant fielder even now, whether slips, close-in, or being lightning in the outfield.”

Jadeja is currently nursing a “right forearm” injury and has been advised to rest for a month, but he may take more than that to recover if the injury requires surgery. As a result, Jadeja wasn’t named in any of India’s squads for their upcoming tour of South Africa starting with the three-match Test series on December 26. India will also play 3 ODIs in the rainbow nation from January 19 before returning home. 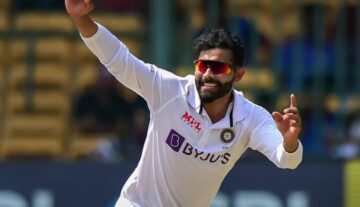