Towards the end of the thrilling game between Sunrisers Hyderabad (SRH) and Rajasthan Royals (RR) an ugly altercation happened Rahul Tewatia and Khaleel Ahmed. Rahul Tewatia starred with the bat as he and Riyan Parag helped the Royals to chase won 159 runs with balls to spare despite reeling at 78 for 5 in the 12th over.

It looked all over for Royals when Rashid Khan dismissed Sanju Samson and Robin Uthappa and then, in quick succession to leave them reeling at 78 for 5 before Rahul Tewatia and Parag joined hands. With the situation of the team being not good, the duo played cautiously early on.

However, they shifted gears in the last five overs when the Royals needed 65 runs. In the 16th over, Parag smashed Khaleel Ahmed for a six as Royals collected 11 runs from it. Then, Tewatia smashed a six while Parag hit two fours in that over. In the following over, the leg-spinning allrounder took in-form Rashid Khan to the cleaners, by smashing three consecutive fours and brought the equation down to 22 from the last two overs.

The match eventually ended on the penultimate delivery of the 20th over when Parag hit Khaleel for another six. Soon after Parag hit Khaleel for a six, the latter and Rahul Tewatia was seen involved in a heated exchange. It had started during the final over when some words were exchanged between the two. They were engaged in a verbal banter after the fourth delivery of the over.

There was a run-in between the two when Tewatia smashed Khaleel’s delivery towards long-on for a single. And after the match ended, the matter only escalated. SRH skipper, David Warner soon intervened to calm things down as he talked to Tewatia who was looking very animated.

The stunning game then ended on a beautiful note as Khaleel was seen making peace as well by putting an arm around Tewatia’s shoulder.

Here is a clip of the entire incident: 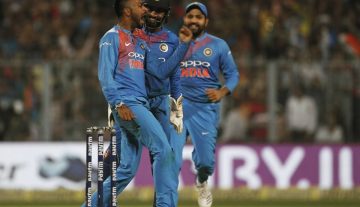 Match Prediction
By CricShots - Nov 10, 2018
Ind vs WI: Predicted XI Of India For The Chennai T20