The second leg of Indian Premier League (IPL) 2021 is scheduled to commencing in less than 2 days now and the fans are eagerly waiting for the season to resume. The season will resume on Sunday (September 19) with all remaining 31 matches taking place in UAE. Notably, many foreign players are unavailable for the UAE leg due to various reasons.

While some have pulled out citing international assignments and workload, injuries have also dented the plans of quite a few franchises and their players. While the unavailability of overseas players will be costly for many teams, Rajasthan Royals were arguably the most affected. After all, the English trio of Ben Stokes, Jos Buttler, and Jofra Archer won’t be taking part in the UAE leg.

In order to fill the void, the inaugural season champions signed four overseas cricketers ahead of the UAE leg. They are Evin Lewis, Oshane Thomas, Tabraiz Shamsi, and Glenn Phillips. While all these cricketers are proven stars of the shortest format, expectations from Tabraiz Shamsi are arguably the most. After all, the South African left-arm wrist spinner is the top-ranked T20I bowler at the moment. 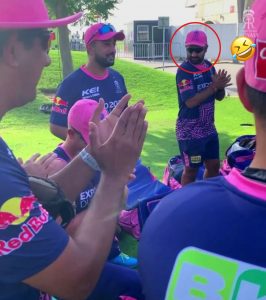 On Saturday. Rajasthan Royals took to Twitter and welcomed Shamsi in the camp ahead of the UAE leg. However, the post had a cheeky dig at Parvez Rassol. As per the post, the picture featured Rohit Sharma and RR thanked the Mumbai Indians captain for the same. They tweeted, “Nice of @ImRo45 (Rohit Sharma) to join us today for Shamsi’s welcome.”

Apparently, the picture had bowling all-rounder Parvez Rasool in the frame and the admin addressed him as the MI skipper. Rasool was sporting a similar beard style to Rohit’s in the frame which also disguised some fans as well.

Nice of @ImRo45 to join us today for Shamsi's welcome. 😌 pic.twitter.com/SZna1XyNSv

With the RR managing to entertain the fans yet again, the comment section got flooded in no time. Meanwhile, RR blew hot and cold in the initial half and they have a job in hand in UAE. With three wins in seven games, the Sanju Samson-led team is currently standing at fifth place in the team standings at the time of season suspension. Hence, they need to win at least five of their seven games to make a place in the playoffs without any hassle 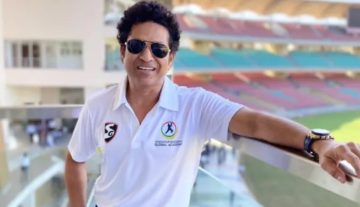