Team India skipper Rohit Sharma is doubtful about the rescheduled fifth Test match against England after he tested positive for Covid-19 on Saturday. But, former India captain Virat Kohli will not lead the team even if he doesn’t get fit, according to his childhood coach Rajkumar Sharma. However, the Chetan Sharma-led selection committee is yet to name a replacement captain for Rohit Sharma in case he doesn’t recover. As KL Rahul (vice-captain) is already out of the fifth Test match due to a right groin injury, it will be interesting to see who will lead the team in Rohit’s absence.

Meanwhile, as per the report, pace bowler Jasprit Bumrah could lead India, whereas Virat Kohli could also be asked to lead the team too. Notably, Kohli had left his Test captaincy duties after they lost the three-match series against South Africa by 2-1. And, Rajkumar Sharma, who has seen Kohli from close quarters at a tender age, believes that his ward will not be interested in leading the side as well.

“He was not sacked or removed, he himself left the captaincy. So, I don’t think I will see him leading again. I’m not very sure what the selectors or the BCCI will decide? Virat is a team man and wants India to do well and contribute to the team, which I think he’s doing very well,” Rajkumar Sharma was quoted as saying by IANS news agency.

“No, he is not at all under pressure. Contributing to the team and India’s victory is more important for him rather than getting his hundred. He never goes after records. So, as long as he’s doing well and is contributing well with the bat, he is not worried about his personal milestone,” he further added.

However, Virat Kohli will have to play a key role as well. Kohli has smashed 1002 runs in English conditions in 15 Test matches at an average of 34.55, including two centuries. He was his best in the 2018 tour and scored 593 runs in five Test matches which came at an average of 59.3 as well. The rescheduled fifth Test match will be played at Edgbaston, Birmingham, from Friday. 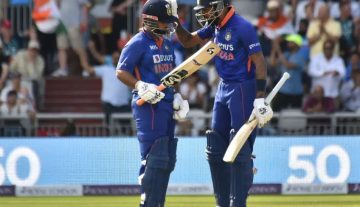