In the past as well as in the present, there have been a plethora of cricketers who have been quite popular amongst the fans for different reasons. West Indies all-rounder, Rahkeem Cornwall is one such character, and on Wednesday in the Atlanta Open when he played a fiery unbeaten knock of 77-ball 205, there was no shortage of applause.

On Wednesday during the ongoing Atalanta Open 2022 – a T20 League based in the USA, Rahkeem Cornwall turned a lot of eyeballs by making a mockery of the ‘Square Drive’ bowlers. While representing his franchise Atalanta Fire, the big West Indies all-rounder managed to smash as many as 22 sixes and 17 fours en route to an unbeaten 77-ball 205.

ALSO READ: Brett Lee Is Surprised To See Umran Malik Not Getting The Ticket To Australia

Riding on his spectacular performance, the Fire finished on 326/1 after coming to bat first. Rakheem Cornwall seemed to be dangerous out there throughout his stay at the crease. However, he still had to score a run off the last ball to notch up his double hundred.

Of course, it was supposed to be an individual milestone in a T20 game, however, the hard-hitting all-rounder did not take the safe path to reach there by taking a single.  Instead, Cornwall hit the bowler straight down the ground for a huge six to complete his double hundred.

After watching him get there in style, Fans and the Fire players applauded Cornwall for staging the show on fire. Cornwall, too, took off his helmet after smashing double hundred and was greeted by the opposition players as well. Meanwhile, Square Drive, in response, could only manage to post 154/6 on the board, enduring a 172-run defeat.

Here is the video of the shot from Rakheem Cornwall: 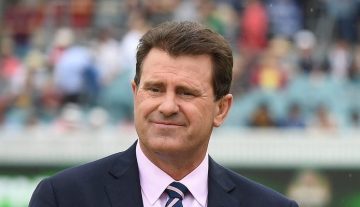