The Pakistan Super League (PSL) 2021 witnessed a dramatic comeback after a long Covid-19 break on the 9th of June with the match between Islamabad United and the Lahore Qalandars. The game had a nail-biting finish as the Qalandars needed 16 runs to win in the final over, and they had five wickets in hand and a daunting task ahead of them. Keeping that in mind, Rashid Khan and Tim David were at the crease.

With Tim David and Rashid Khan at the crease, the chase wasn’t easy and it was the latter’s show in the end. Rashid hasn’t opened his account before the final over. He smashed the bowler to all parts of the park and helped his team to register a rather hard-fought win. Here is the video of the game in the final over and how Rashid Khan clobbered Hussain Talat:

For his brilliant performance with the bat and the one wicket with his bowling, the Lahore star won the Man Of The Match award. This was not the first time that the SRH maestro had produced such a great showing.

Earlier, the Lahore Qalandars’ skipper, Sohail Akhtar had won the toss and decided to bowl and his bowlers’ didn’t disappoint.

Islamabad United managed to reach a total of 143 runs for the loss of nine wickets in their 20 overs. Faheem Ashraf was their top scorer in that innings with 27 runs to his name. On the other hand, James Faulkner was the pick of the bowlers as he scalped three wickets. The score was an average total and there was no doubt that it was clearly chasable.

With that mindset, the Lahore Qalandars came out to bat and were looking good to go. The skipper played a decent knock of 40 runs and lead his team from the front. Further, Mohammad Hafeez (29) and Tim David (23) were the other highest scorers. To add to that, Rashid Khan stole the show at the very end with his brilliant hitting. 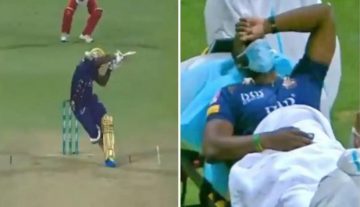 Videos
By CricShots - Jun 12, 2021
Andre Russell Was Sudstitued By Naseem Shah After Concussion