The Indian head coach, Ravi Shastri is surely a favorite for trollers on various social media platforms. Ahead of the historic day-night pink-ball Test at Eden Gardens in Kolkata against Bangladesh, seeking blessings, Shastri was recently posted a picture on his official Twitter account of him visiting the iconic Mahakaleshwar Temple in Ujjain. He was in the company of bowling coach Bharat Arun.

Shastri was dressed in a priests attire while offering prayers. Once the India head coach posted the picture on his social media accounts, fans were quick to come up with hilarious responses. Some fans felt that he was there because former Indian skipper, Sourav Ganguly had become the BCCI president and there were other funny responses as well.

Here is the picture posted by Shastri on Twitter:

And here is how fans hilariously reacted:

One of the users took a dig at Shastri mentioning Sourav Ganguly, he tweeted: “Sourav ganguly became president…thats y this is happening sir”.

Under the captaincy of Virat Kohli, the Indian team outplayed Bangladesh by an innings and 130 runs in Indore to take a 1-0 lead in the two-match Test series. Mayank Agarwal was adjudged the player of the match for his 243-run innings his second double century in Test cricket.

India will play its first pink-ball Test in Eden Gardens. In order to get acclimatized to the lights and the pink-ball, the side was seen practicing in Indore after the first Test ended in under three days.

On Friday, Cheteshwar Pujara, Ajinkya Rahane, Virat Kohli and Ravichandran Ashwin got a first feel of playing with the pink ball under lights during a day-end net session at the Holkar Cricket Stadium. 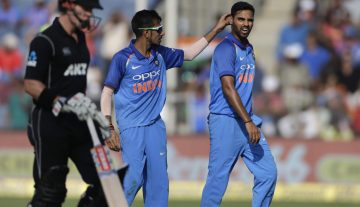