The premier Indian spinner, Ravichandran Ashwin has come out with his humorous best on Monday after New Zealand’s Devon Conway played a sensational knock against Australia in the first T20I at the Hagley Oval, Christchurch. New Zealand was reeling at 19/3 before Conway unleashed the beast within himself to hammer an unbeaten 99 off 59 balls and guided the hosts to 184/5 from their 20 overs.

The 29-year-old went unsold in the Indian Premier League (IPL) 2021 players’ auction last week even though he had set the base price at ₹50 lakhs and Ravichandran Ashwin was quick to point out the funny side after the batsman played a match-winning knock. He tweeted, “Devon Conway is just 4 days late, but what a knock.”

Devon Conway is just 4 days late, but what a knock 👏👏👏 #AUSvNZ

After being asked to bat first, New Zealand lost Martin Guptill for a third-ball duck. If Guptill’s poor form wasn’t enough for the New Zealand players, Jhye Richardson castled Tim Seifert in the third over to pile further misery on the host. Skipper Kane Williamson also got dismissed in the next over as New Zealand lost three wickets before the powerplay got over. Then along with Glenn Phillips, Conway put the New Zealand innings back on track.

The duo added 74 runs for the fourth wicket before Marcus Stoinis broke the partnership. Devon Conway continued his fine form and completed his half-century off just 36 balls. With seven overs left, Conway and Jimmy Neesham decided to go out all out on the Australia’s bowling. In the next three overs, the duo smashed 34 runs.

A fine partnership between the two was broken by Richardson in the 17th overs as he dismissed Jimmy Neesham but Conway continued his onslaught to steer New Zealand to 184/5 in the 20 overs.

Carrying on the momentum, New Zealand bowlers were too hot to handle for Australia’s top order, reducing them to 19/4 inside the Powerplay. Trent Boult and Tim Southee shared two wickets apiece in their opening spell as Australia was left reeling. Leg-spinner Ish Sodhi took four wickets after the field restrictions as New Zealand won the match by 53 runs to take a 1-0 lead in the five-match T20I series. 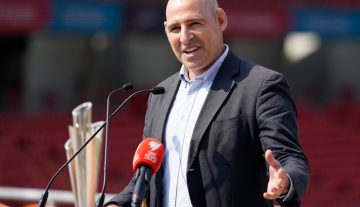 News
By CricShots - May 18, 2021
Nick Hockley Confirms BCCI Paying For The Players’ Isolation In Australia