Things have turned a lot in Indian Cricket Team. At least for the star spinners of the team once, Ashwin and Jadeja. Both of them has many instances of saving India in matches. But lately, both have been in low-performance key and the better performances of youngsters like Kuldeep Yadav and Chahal has led them out of the team for a long while. In 2017 SouthAfrica tour the pair was not picked up.

Ashwin is now seen leading his team Kings XI Punjab. Punjab still dates performed in a balanced manner and is u therein the points table.Ashiwn is the main strike bowler but he is seen to be just bowling leg spin although he has earlier bowled a lot of variations too. This has made the Indian Selector Kris Srikkanth comment that if the spinner continues to bowl in that fashion then his dreams for an Indian team comeback is doomed.

According to Srikanth, Ashwin doesn’t need to try hard a lot. he already has proven himself with his statistics. He just needs to be a bit more focused and concentrate on improving more of his variations that exist. If not, then it would be tough enough to find a place in the national team.

Whereas Veteran like Kapil Dev has backed up the spin sensation.

“We feel very sad and concerned about it. He tries too many things. We don’t know, and it’s difficult to understand why he’s trying this tactic. It’s ok to try leg spin as a variation once in a while in a T20 match, but he’s experimenting with this in every game – be it in the IPL, Ranji Trophy or even the Irani Cup. In Irani, he was bowling leg spin from over and round the stumps. In a T20 game, variation is fine, but have you ever seen an off-spinner doing this? He can’t suddenly become a legspinner,” a source told TOI.

When you talk about limited-overs cricket, he isn’t even close to being an option. It’s not just about his bowling. His fielding is below-par. He doesn’t fit into the limited overs team. We need super-fit players in T20s and One-day cricket. Basic skills come later, but when it comes to the minimum acceptable fitness standards, Virat Kohli isn’t ‘merciful’ on himself, so why will he make compromises for others?”the source concluded. 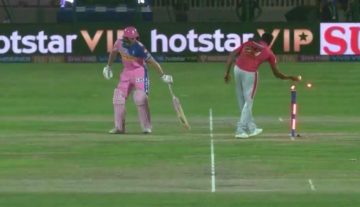