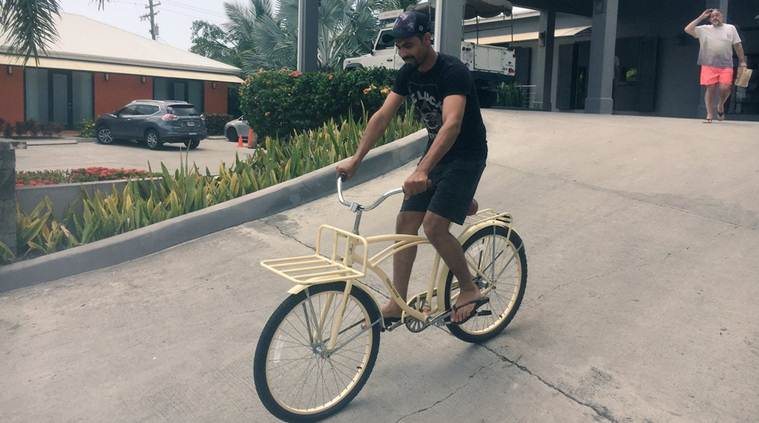 The flamboyant Indian all-rounder, Ravindra Jadeja has recently been cited cycling in the city outskirts of beautiful Caribbean Islands in his free time during the course of the ongoing India’s limited-overs tour to West Indies.

The image of Jadeja’s cycling in the Caribbean went viral on the internet and the reason behind his stunt was disclosed by himself via his official Twitter account.

The reason behind the Ravindra Jadeja’s stunt was nothing but our very own Prime Minister of India, Narendra Modi who has recently done cycling, as an official of Netherland gifted a unique piece of cycle to Modi and being a Social Media enthusiast, Narendra Modi uploaded the photograph of him on the bicycle as soon as he took the ride on it.

Though Modi didn’t give any speech related to riding the bicycle stunt, the ever smart all-rounder of the Indian team took something from it and started bicycling on the streets of Caribbean Islands and later took to Twitter to propel his thanks to the prime minister of India, Narendra Modi Ji.

Jadeja tweeted, ”Thanks a lot, sir. You inspiring all the Indians around the world.”

Thanks a lot sir. You inspiring all the Indians around the world. #greatmen #proudindian https://t.co/k6XnlvjD3p

Ravindra Jadeja has been rested for the first couple of matches in the ongoing series in order to give an opportunity for the youngster, Kuldeep Yadav who displayed a fantastic piece of work with his wrist spin. It is doubtful for Jadeja to get back place in the playing XI of the remaining matches as Virat Kohli was seen fascinated with the way Kuldeep molded in second ODI.

News
By CricShots - Jan 27, 2023
Ravindra Jadeja Is Confident Of Playing The Border-Gavaskar Trophy