After taking a 1-0 lead in the ongoing 5-match series against New Zealand, Team India is looking to extend the lead at the Bay Oval, Mount Maunganui. They defeated the hosts by 7 wickets in the first ODI in Napier. In the second game, the Indian skipper, Virat Kohli decided to bat and the openers Rohit Sharma and Shikhar Dhawan stitched the opening partnership of 154 runs and the innings ended with the vintage finishing touch from MS Dhoni. India scored 324/4 in their quota of 50 overs.

India made no changes to the squad as compared to the first ODI however, the hosts’ skipper Jane Williamson had decided to make two changes as Tim Southee and Mitchell Santner made way for Colin de Grandhomme and Ish Sodhi.

However, an incident took place in the 39th over of the game bowled by Sodhi which gave an opportunity for Kohli to laugh at his fellow countryman Ambati Rayudu. On the over the first ball of the over, Virat played a cut shot to deep point for an easy single. However, when the throw came at the keeper’s end, Rayudu copped a blow on his back as the throw comes in one bounce. He tried to bend and avoid, but couldn’t as the keeper Tom Latham also had a chance of the fielding the ball early but he didn’t.

The fielder apologized to Rayudu, who said nothing to the fielder just gave expression on being serious. On the other hand, Kohli saw the lighter side of that as he burst out laughing at Rayudu being in an awkward situation.

Dhoni along with Kedar Jadhav made a partnership of 53 runs in just 26 balls. However, the highlight was that they amassed 35 runs in last two overs which helped India reached 324/4 in their quota of 50 overs. 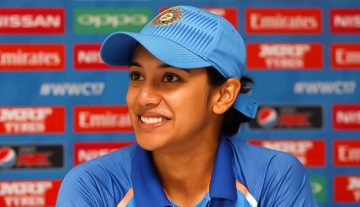