With India already leading the three-match Tes series by 2-0, they are playing the final Test against visitors in Ranchi. The Indian opener, Rohit Sharma has successfully attracted the spotlight towards him in this series. In the first Test, he scored twin centuries and also missed his maiden hundred in the first innings by 24 runs and now he had scored a double century in Ranchi Test.

The biggest achievement for Rohit came in the final match of the series when he broke a record of Sir Don Bradman. He got out at a score of 212 runs but before getting out he surpassed the record of Sir Don Bradman for having the highest Test average at home with a minimum of 10 innings. He is now having a Test average of 99.84 on home soil. Earlier, Don Bradman had an average of 98.22 in 50 innings at home with 4322 runs.

WATCH – When Kohli Joined Jadeja In His Sword Celebration

Rohit has also become the third Indian to score a double century in all formats after Sachin Tendulkar and Virender Sehwag. He also recorded the highest fourth-wicket partnership against South Africa of 267 runs along with Ajinkya Rahane and rescued India from the top-order collapse of Day-1.

Rahane slammed 115 runs in the first innings of the third Test against South Africa in Ranchi to take his team to a commanding position. He also smashed a century in his last series against the West Indies in August-September and now created a unique record during his 200-run stand in Ranchi. It was his 200th partnership in Test cricket during which neither Rahane nor his partner got run-out, which is a world record.

On Day 2, minutes before the Tea interval on the 2nd day, Umesh Yadav came to the crease with all guns blazing as he took on debutant George Linde by clearing the fence over cow corner to open his account. He followed it with another maximum on the very next ball this time over long-on. His knock came to end when he was caught by Henrich Klaasen as he scored 31 off 10 balls which came at a strike rate of 310.

Umesh became the first player to have a strike rate of 300+ in a Test inning of 10 or more deliveries. The previous best strike rate was 281.81 for Stephen Fleming who scored an unbeaten 31 from 11 deliveries. In fact, Umesh also joined a rare list by smashing sixes off the first two balls he faced.

There are only two recorded instances of players hitting the first two balls of a Test innings for sixes prior to Yadav. Foffie Williams in the bowling of Jim Laker in 1948 and India’s Sachin Tendulkar against Nathan Lyon in 2013 achieved this feat. Umesh’s innings included five sixes but no fours. This makes it the first-ever Test innings to witness five or more sixes without a four.

Team India declared their innings after posting a mammoth total of 497/9 declared. Currently, South Africa is following on at 26/4 at Tea on Day 3 as they were bundled out fie 162 in the first innings. 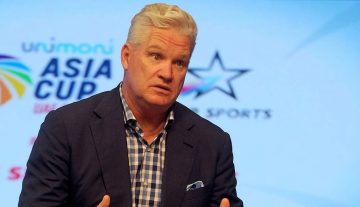