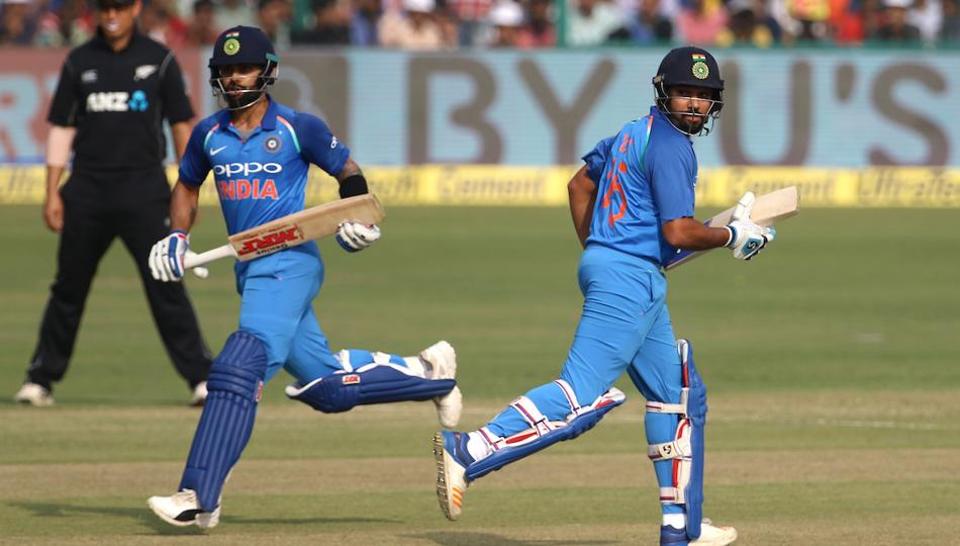 India and New Zealand locked horned in Kanpur for the third and the final ODI of the series, after Kiwis won the first ODI in Mumbai and India equaled the series in Pune.

Kane Williamson won the toss and decided to field, keeping the dew factor in mind during the second innings. Shikhar Dhawan started off well but got out for 14, trying to push the pace.

Virat Kohli along with Rohit Sharma took on the Kiwi bowlers and let them pay for the smallest mistakes throughout their partnership. Rohit was in his ‘A’ game and scored 147 in 138 balls with 18 fours and 2 sixes. Kohli almost batted through the innings and scored 113 off 106 balls with 9 fours and a lone six. The duo added 230 runs for the second wicket.

Rohit scored his 15th ODI hundred and first against New Zealand. Virat scored his 32nd century in ODIs and 6th in 2017, the most by any captain in ODIs. He also became the fastest batsman to 9000 runs in ODIs.

Tim Southee, Adam Milne and Mitchell Santner shared 2 wickets each, while Trent Boult went for 81 runs in his 10 overs. India scored 337/6 in their 50 overs in a series-deciding ODI.

New Zealand needed momentum early in the innings in order to chase down such a big total, but Guptill was sent back to the pavilion for 10 off Bumrah. However Coli, Munro scored 75 in 62 and added 109 with Kane Williamson who made 64 runs. But Chahal scalped both of them in quick succession to bring India back in the match.

When Indian bowlers brought themselves back by removing Ross Taylor for 39, Kohli might have sensed India’s victory. But Henry Nicholls (37 off 24 balls) and Tom Latham (65 off 52 balls), who has been in form of his life, took New Zealand close to the target.

Bhuvneshwar and Bumrah bowled one of the best death over spells from both ends each and the run out of Tom Latham in fright, brought the momentum to India’s favor. New Zealand needed 15 runs off the last over off Bumrah. And Bumrah did the job for the hosts. This was India’s 7th consecutive ODI series win and they haven’t lost a home ODI series since 2015.

New Zealand played badly in the last 4 overs, as Bhuvneshwar and Bumrah put tremendous pressure on the Blackcaps and the wicket of Tom Latham sealed the game for India.