Former Australia skipper, Ricky Ponting has showered praises on Suryakumar Yadav saying the latter has got all the shots in his book similar to that of South African stalwart, AB de Villiers, who possessed the ball to all the parts of the ground. Ponting has also suggested Suryakumar should bat at his preferred No. 4 in the next T20 World Cup. Ever since making his debut against England in March last year, India’s batting sensation Suryakumar Yadav has been doing wonders all across the world.

Considering his red-hot form in T20Is, Ricky Ponting lauded Suryakumar for his confident style of batting. In fact, Ponting went on comparing him with the legendary South African AB de Villiers. The comparison, although it is nothing new as both loves to play all around the ground, getting it from someone like Ponting adds more value to it.

ALSO READ: Washington Sundar Officially Ruled Out Of The ODI Series In Zimbabwe

During a chat during the ICC review, Ricky Ponting said, “He’s (Suryakumar) quite a confident person. He backs himself and he’s never going to step down from a challenge or any situation that arises in a game. I feel he thinks he can win that situation and therefore go on and win the game for his team. Surya (Yadav) scores 360 degrees around the ground, a bit like an AB de Villiers did when he was in his actual prime.”

He further added, “The lap shots, the late cuts, you know, the ramps over the keeper’s head. He can hit down the ground. He hits really well over the leg side, flicks to deep backward square particularly well, and he’s a good player of fast bowling and is a good player of spin bowling.”

Further, when asked what should be the batting position of Suryakumar in the upcoming T20 World Cup in Australia, Ponting replied the stylish Indian batter should walk at No. 4 while Virat Kohli should stick to No. 3.

Explaining the same, Ricky Ponting said, “I said to stick with him (Virat) in his traditional spot, which has been number three. For Surya, it’s one, two, or four. I think he can open, but I think he’s probably, you know if you could probably just keep him away from the new ball, let him control the middle part of the game outside the Powerplay, through in the middle, and if he’s in at the end, you know what can happen. I think in the top four is, well, actually I’ll go out on a limb.” 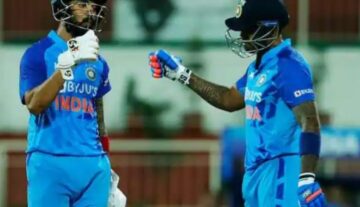