India and South Africa are looking horns with each other in the second T20I of the three-match series at the Holkar Stadium in India. In the 17th over of the innings, Rilee Rossouw walked into his own stumps while preparing a slog off a free-hit, even though Mohammed Siraj refused to deliver thus helping Rilee Rossouw save face.

Earlier in the game the Indian skipper, Rohit Sharma won the toss and decided to bowl first citing the batting paradise. While, the Proteas skipper, Temba Bavuma made just one change in the XI as Dwaine Pretorius came in for Anrich Nortje, India made as many as three changes as KL Rahul, Virat Kohli, and Arshdeep Singh made way for Shreyas Iyer, Mohammed Siraj, and Umesh Yadav.

In the 17th over, Mohammed Siraj bowled a beamer that caught Tristan Stubbs’ bat above his waist, leading the umpire to signal a free-hit. With Rilee Rossouw on strike, everyone expected the ball to be deposited into the stands.

While Siraj charged in hoping for a let-off, his prayers seem to have been answered as the free-hit encountered an anti-climactic moment. Rilee Rossouw had been waiting deep in his crease, possibly expecting a yorker and thus expecting to slog the ball into the stands.

However, before Siraj could deliver the ball, the batter, in anticipation, simply crashed into his own stumps, lighting up the bails. Siraj could have used the opportunity to save his team crucial runs as the ball would have ensured a wasted free-hit but he instead chose to pull out of his run-up. A relieved Rossouw shared a nervous laugh with Siraj returning to his run-up.

Here is the video of Rilee Rossow stepping on to the stumps:

It is not out ….not because it was a dead ball – as the ball is not “born yet” – Bowler Siraj still in his runup but because its a free hit (the previous ball was a noball)

You can't be hit wicket on a free hit? Rossouw just stepped onto his own stumps. It's all happening! #INDvSA

– Siraj didn't bowl (was in run up) after saw Rossouw hit wicket himself (that was free hit).

Isn't it comes under hit wicket? 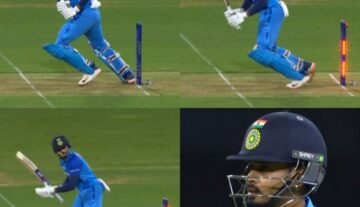 Videos
By CricShots - Nov 20, 2022
Shreyas Iyer Finds Quirkiest Way of Getting Out In Mount Maunganui