Kolkata Knight Riders (KKR) finally managed to put a stop to their five-match losing streak on Monday (May 2) in the ongoing Indian Premier League (IPL) 2022 with their 4th win of the season that came against Rajasthan Royals (RR). Rinku Singh was the star for them scoring an unbeaten 42 off just 23 balls with six fours and one six in a tricky chase on the night. He also deservedly won the Player of the Match award for his match-winning performance with the bat.

Interestingly, Rinku Singh had a feeling of doing well, perhaps scoring a fifty against RR even before the game started. He also wrote a number 50 on his hand and after the game, he revealed the same to his friend Nitish Rana about the same. In a video posted by KKR on its official Instagram handle, Rinku can be seen showing ’50 not-out written on his hand.

Rinku Singh also explained the reason he wrote the number on his hand while saying that he felt that he would do well in the game. The talented batter also went on to say that he had been waiting for such an opportunity for the last five years. Though he couldn’t score a fifty, Rinku Singh managed to play a match-winning knock for KKR and helped his team to register their fourth win of the season.

Meanwhile, when Rinku Singh said he was waiting for his chance to prove his worth for the last five years, he wasn’t lying. He is rated highly in the domestic circuit where he plays for Uttar Pradesh and also made his IPL debut way back in 2018. But the game against the Royals was only his 13th in the IPL which proves how far and few opportunities he has got.

Even in IPL 2022, he was not a preferred candidate to make it to the starting XI and only played his third game of the season on Monday. However, he has already scored 100 runs at an average of 50 and a strike rate of close to 150, proving his mettle. He will be hoping to get consistent chances now at least in the remaining matches and the KKR management will hope that he continues batting in the same manner. 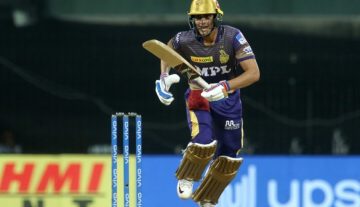